As expected, Huawei today officially unveiled its first clamshell smartphone, the P50 Pocket. During the premiere, the smartphone was compared with the iPhone 13 Pro Max (in terms of size and camera), and with the Galaxy Z Flip3 (in terms of the folding mechanism).

Huawei has developed completely new hinges for the P50 Pocket, thanks to which, when folded, the halves of the case are located strictly parallel to each other – in the Samsung competitor, we have a gap.

Huawei P50 Pocket received a 6.9-inch screen with an aspect ratio of 21:9, a refresh rate of 120 Hz and a resolution of 2790 x 1188 pixels. The diameter of the round front screen is 1 inch. It should be noted that Huawei has done a good job on the interaction of the outdoor and indoor screens. For example, if the user is using navigation software, then when the smartphone is closed, navigation prompts are displayed on the external screen. You can also display a variety of data on the external screen, including QR codes. Displaying information messages and widgets on the external screen is also supported by third-party applications.

Rumors said that the P50 Pocket will receive the Kirin 9000 platform; but in reality, the smartphone is built on Snapdragon 888 4G. The main camera is represented by three sensors: a main resolution of 40 megapixels, a 13-megapixel one connected to an ultra-wide-angle lens (here Huawei is proud of the absence of distortion in the pictures) and a 32-megapixel Ultra Spectrum sensor.

During the presentation, the images from the P50 Pocket were constantly compared to those from the iPhone 13 Pro Max. And it is clear which model has an advantage on the side. 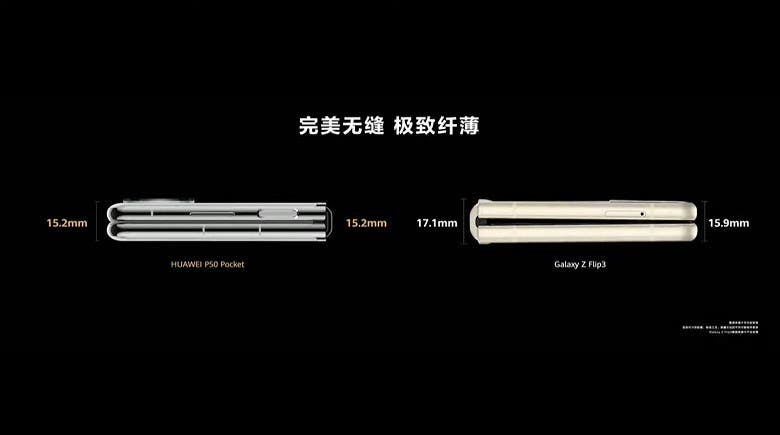 The P50 Pocket has a 4000mAh battery with 40W fast charging support. In terms of these parameters, it has no competitors in the segment. The battery capacity of other models is smaller, and they do not support such fast charging. 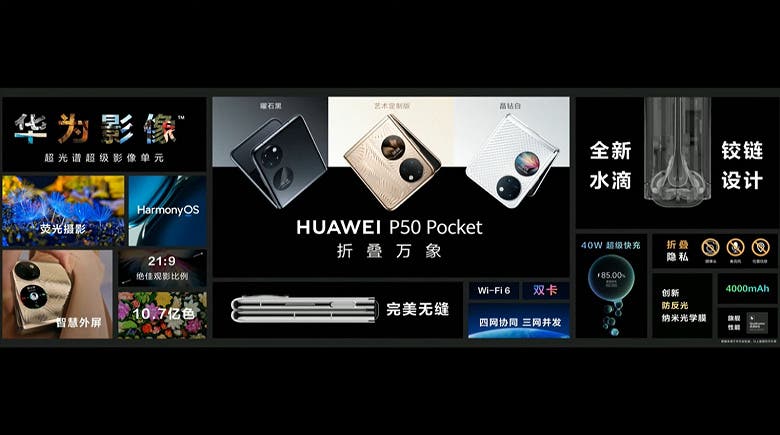