The promotional campaign to promote Xiaomi 12 continues and today the company undertook to illuminate the cameras that will receive the novelties of the new series. So, it is already known that in the main camera of the basic version of the series, the 50 megapixel Sony IMX766 sensor will set the tone, while with the arrival of the Xiaomi 12 Pro, the premiere of the new Sony IMX707 sensor, also with a resolution of 50 megapixels, will take place.

A little time passed, and the company started talking about the front camera. It announced that a 32-megapixel sensor with GAN (built-in beauty filter) technology will be installed on the front panel, which allows you to give your skin a fresh and youthful look, and all this should look as natural as possible. 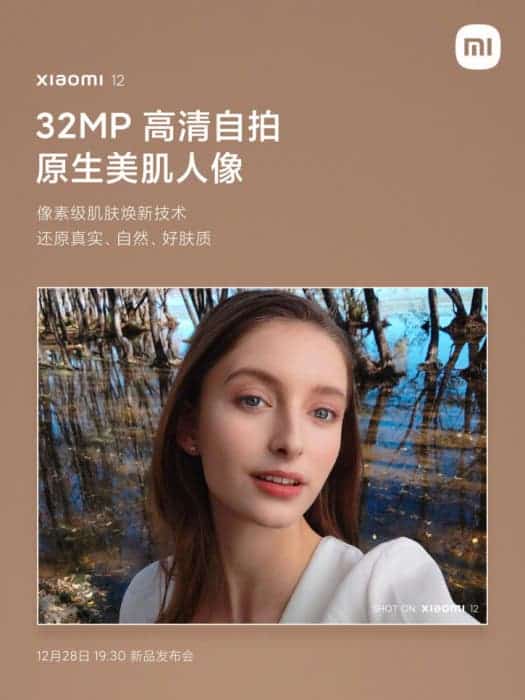 The company has added the characteristics of the main cameras Xiaomi 12 and 12 Pro by mentioning the CyberFocus technology. Its trick is the ability to identify multiple objects, distinguish between their characteristics and track focus. This will improve the capture effect and increase the likelihood of creating a high-quality image.

Judging by the new teasers, the company is trying to create the impression that the Xiaomi 12 and Xiaomi 12 Pro, in terms of their photo capabilities, should be among the best devices on the market. Perhaps it will be so if the developers do not spoil everything.

Not a day without leaks or official information about the upcoming Xiaomi 12 smartphone series. This is the period that many specialized publications are currently experiencing. There is no shortage of information about new products and every day we learn something new.

Xiaomi is preparing to unveil a new family of flagship smartphones on December 28th. Ahead of the announcement of the Xiaomi 12, the Chinese tech giant has shared new details regarding the upcoming devices. The company has confirmed that the base Xiaomi 12 model will receive a 6.28-inch screen; and also compared the smartphone with the iPhone 13.

So, Xiaomi said that the basic version of the upcoming flagship will receive a 69.9 mm wide body; which should make it easier to use the device with one hand. Also, the company has even released official images comparing this to the 6.1-inch iPhone 13, which is 71.5mm wide.

Another teaser image advertises the improved Xiaomi 12 main camera. In addition, the company reportedly spent two years on research and development to improve the image capture algorithms. The teaser also talks about faster image processing in all scenarios, including night mode photography.

Previous Are you ready for your Christmas treat with PureVPN ?