From the reports so far, the Realme GT2 Pro will use the second-generation LTPO display and also support a 120Hz high refresh. This will be the best high-end flagship in the history of Realme. This flagship screen will also use a new fingerprint recognition technology. Furthermore, it may also support the “heart rate detection” function. Users can complete the recognition by placing their fingers on the fingerprint area.

Furthermore, there have been leaks of the real image of the Realme GT2. Unfortunately, we do not know if this image belongs to the Pro series. Judging from the leak, this phone has a fourth-class narrow bezel and uses a punch-hole solution in the upper left corner. This display of this smartphone also comes with an excellent screen-to-body ratio. Realme also reveals that the Relme GT2 series will be officially released on January 4th. The Realme GT2 Pro has been confirmed to be equipped with the latest Snapdragon 8 Gen 1 chip. 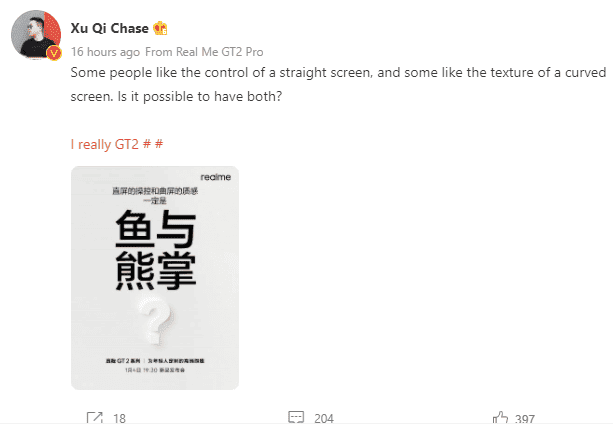 From the official teasers, the company claims that this smartphone will have a straight display that feels curved. This is quite strange and we do not know how Realme intends to achieve this. Furthermore, Realme claims that the GT2 Pro will be a top flagship smartphone. We expect the company to reveal more details about this device in the coming days. As for the price of this device, there is no clue as to what to expect. Nevertheless, like other Realme flagships, this device should be pocket-friendly.