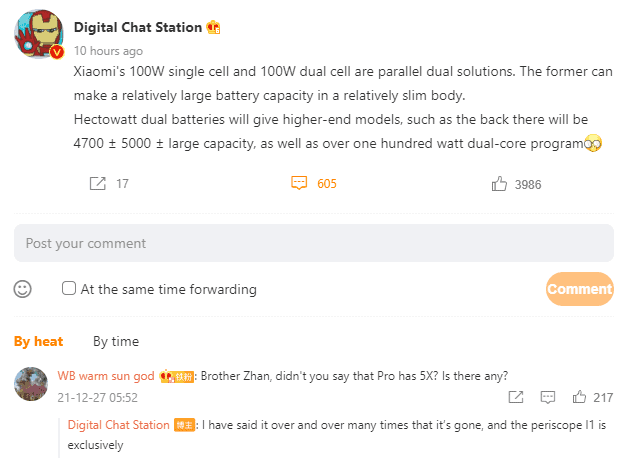 However, it is not a surprise that Xiaomi is eliminating the telephoto camera from the Pro model. After several years of marketing gimmicks, everyone’s pursuit of periscope telephoto has become calm. In all honesty, this sensor has no effect on the daily use of an average smartphone user. On the contrary, it is better to save some costs and do a good job with the main and wide-angle cameras. These sensors have a direct effect on the imaging experience.

Furthermore, the Xiaomi 12 series focuses on thinness and lightness. Thus, the periscope telephoto camera poses a huge challenge to the thickness and width of the device. When the Xiaomi 12 Ultra arrives next year, it will use this sensor and will have to compromise on its thickness.

The basic parameters of the Xiaomi 12 series are already online. Lei Jun (Xiaomi’s CEO) recently revealed that the company will bring a big upgrade to the camera of the Xiaomi 12 series. He revealed that the Xiaomi 12 Pro will premiere the Sony IMX707 sensor. This means that this device will be the first in the world to use this sensor. This is one of Sony’s top sensors, with a 1/1.28-inch ultra-large bottom, 2.44um fused large pixels and a 49% increase in light input.

Xiaomi will also do a lot of work to upgrade its night-scene shooting capabilities. It will upgrade the night scene color reproduction, highlight suppression, night scene photography, and night scene video shooting. Lei Jun also released some sample shots of the Xiaomi 12 Pro night scene capacity. Unfortunately, we do not have specific information about the IMX707 for now. However, from the perspective of core specifications, it looks very close to the previously released IMX700. This sensor should be an upgraded and optimized version of IMX700, and the pixels should still be 50MP.