After rounds of rumors, Motorola has unveiled its Motorola Edge X30 in China. The device was announced as the world’s first Snapdragon 8 Gen 1 smartphone. The device in question will eventually hit the international markets, and rumors have been suggesting it with the Motorola Edge 30 Ultra moniker. We don’t know if that is the case, but if it’s, then there is another smartphone coming from the company with the Snapdragon 8 Gen 1. A new Motorola device has passed through the Geekbench website. The device had its Motorola Edge 30 Pro moniker confirmed along with some key specifications.

The device also runs Android 12 out of the box. Nowadays, Motorola ships its smartphones with a layer of its new MyUX on top. When it comes to the Geekbench benchmark, the device scored 1,172 in the single-core tests and 3,302 in the multi-core department. According to rumors, there will also be a variant with 8 GB of RAM. 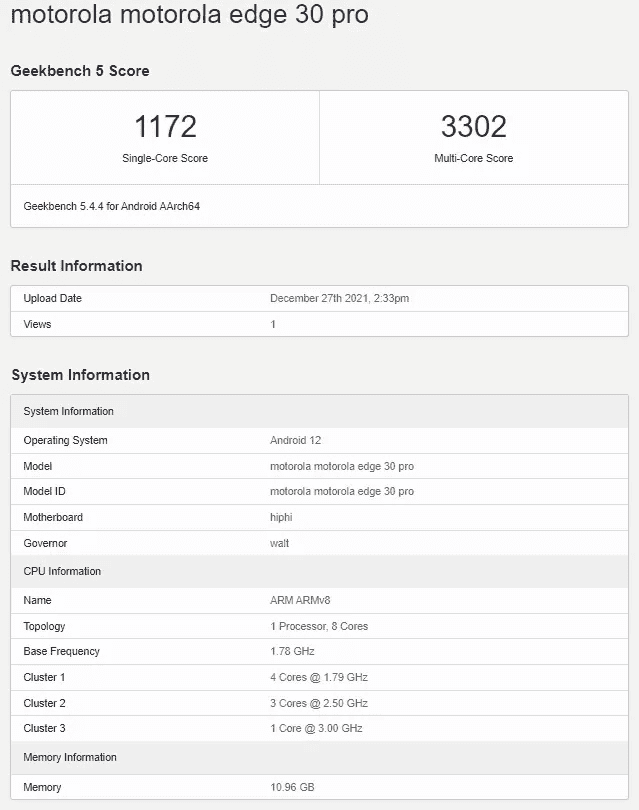 According to rumors, the Motorola Edge 30 may carry some similarities with the Ultra aka X30 model. The device may carry a 50 MP or a 108 MP triple-camera setup. We may also expect a huge 5,000 mAh battery with Motorola’s new 68 W fast-charging system. We also expect a large AMOLED display with a Full HD+ resolution of 2,400 x 1,080 pixels of resolution. Moreover, the panel may bring a high refresh rate with 120 Hz or 144 Hz.

The Motorola Edge X30 comes in two particular variants. There is a standard version that flaunts a punch-hole display. The Special Edition is really special since it’s totally bezel-free thanks to an under-screen camera. We still don’t know how Motorola will name these two variants in the International markets. We wouldn’t be surprised to see the under-screen camera version coming as the Ultra and the punch-hole version as the Motorola Edge 30 Pro. Time will tell.

Next Xiaomi 12 Pro will have a periscope telephoto lens