Tecno launched a multitude of budget smartphones this year, most of them 4G only. Today, however, the company is finally taking a step forward with the release of a new 5G smartphone. Tecno is part of Transsion Holdings conglomerate’s big plan to become a relevant brand in the International markets. The group behind Infinix, Tecno, and Itel has been expanding its efforts to conquer users in emerging markets. Today, the company has introduced the Tecno Pova 5G which brings compelling specifications such as a Dimensity 900 5G and a beefy 6,000 mAh battery.

The Tecno Pova 5G flaunts a massive 6.9-inch IPS LCD screen with a Full HD+ resolution of 2,400 x 1,080 pixels. The panel also has a 120 Hz refresh rate and sports a punch-hole at the top-center for the selfie snapper. The camera itself is a 16 MP selfie camera. Moving around to the back, we have a triple-camera setup. It comprises a primary 50 MP snapper, a 2 MP macro camera, and an unspecified depth sensor. There is also a dual-LED flash. The back comes with a dual-textured pattern that gives a unique look to the device. 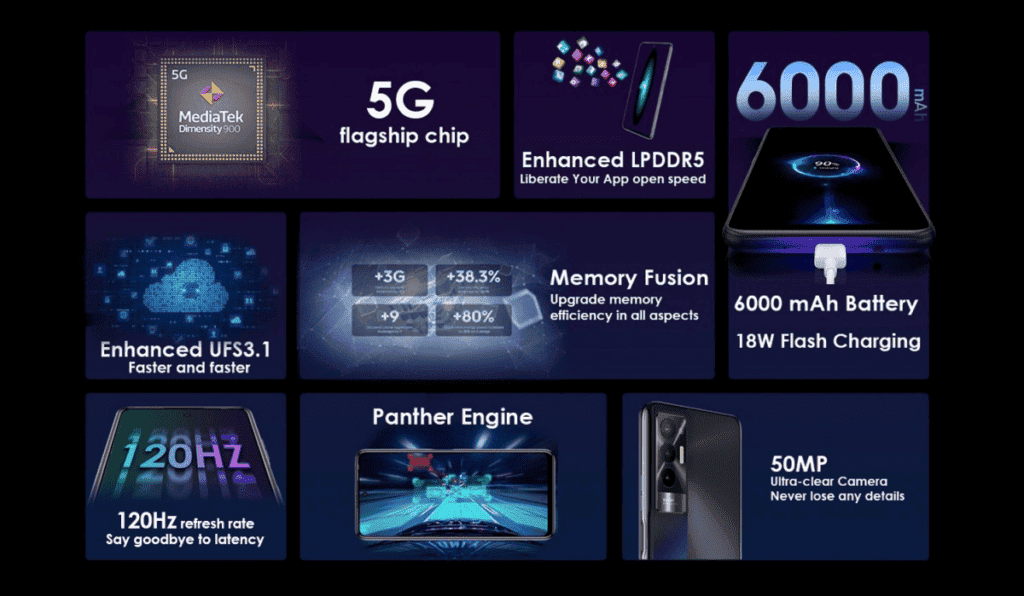 The handset also has a side-mounted fingerprint scanner, a 3.5 mm headphone jack, and a USB Type C port. The device draws its powers from a huge 6,000 mAh battery with 18 W fast-charging. The battery is massive and should give you more than two days with this efficient chipset. However, charging it should take more than 2 hours. One of the downsides of the device is that it still comes with Android 11. There is a coat of HiOS 8 running on top of the device.

The device is available in a single colorway dubbed Aether Black. Unfortunately, Tecno didn’t disclose how much the Tecno Pova 5G will cost and has not revealed where the device will be available.