Imagine having your hands on the flagship of 2022: powerful, thin and capable of taming any tough game. After installing your favorite game, you finally launch it on your smartphone, sincerely hoping that such a beast will definitely give out the maximum frame rate and you will not encounter freezes and lags. But after a few minutes of the game, it turns out that the frame counter has dropped, and the smartphone has become hot as an oven.

Actually, what we have described is not a fantasy. This may be a harsh reality for flagships based on Snapdragon 8 Gen 1. Regular readers of our resource are aware that for all its power, this chip suffers from overheating. And here the correct organization of the cooling system comes to the fore. Yesterday, such cooling was grabbed at the presentation of Xiaomi 12, and on January 4, it will be Realme’s turn to convince users of the effectiveness of its cooling system in the realme GT 2 Pro.

The vice president of Realme announced today that the company is known as the “master of dragon taming”. He also posted a teaser that indicates that the Realme GT 2 Pro will receive a powerful and efficient cooling system. It is the first in the industry in two ways: it has the largest heat dissipation area in the industry at 36761 mm² and the largest liquid cooling system in area at 4129 mm².

The new cooling system in Realme GT 2 Pro is also interesting in that it offered a heat-dissipating gel; whose heat dissipation performance is 50-60% better than conventional gels. And all thanks to the use of diamond particles with a diameter of 40-50 microns. It is able to reduce the temperature of the processor cores to 18 °C. 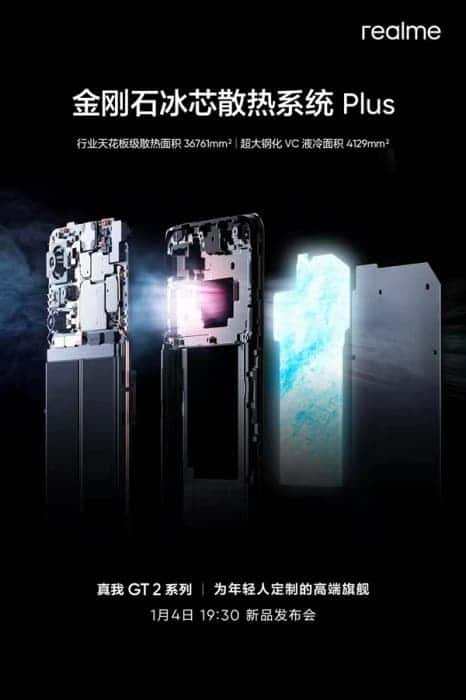 The well-known Chinese insider under the nickname Digital Chat Station has earlier published the first test results of the new flagship smartphone from Realme.

The device passes under the model number Realme RMX3300; but it should enter the market under the name Realme GT2 Pro. The smartphone based on the Snapdragon 8 Gen1 SoC scored 1,025,215 points.

Realme GT 2 Pro should offer a 120Hz OLED screen with QuadHD + resolution; and a diagonal of 6.8 inches, a 5000 mAh battery with fast 125-watt charging, a 32-megapixel selfie module; and three image sensors on the back; where two sensors must have a resolution of 50 megapixels and is complemented by an 8 megapixel module.

Next Head of Xiaomi: Xiaomi 12 is a direct competitor of the iPhone 13!