Since the arrival of smartphones on sale, users spend more and more time in front of screens, unable to get enough of digital content. The consulting company Apptopia has published an annual ranking, naming the most popular apps in the outgoing year.

As the statistics quite predictably showed, the most popular was the software that was regularly mentioned in the online media. However, there are minor differences in the ratings compiled for the entire planet and, separately, the United States. The company has compiled a single list of the most downloaded applications for Android and iOS. The most popular mobile programs in the world are: 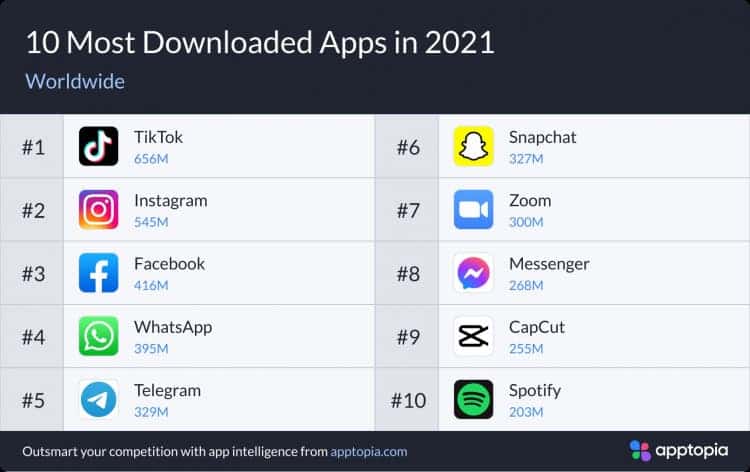 Quite predictably, TikTok takes the first place, and the top ten include apps like Facebook, Snapchat and Spotify that have already become traditional leaders. It is noteworthy that four out of ten lines of the rating are occupied by programs belonging to Meta. The newcomer to this company was CapCut, a video editing program. This software belongs to the company ByteDance, which also owns TikTok – the tool is optimized specifically for this application.

In the US, the ranking is different: 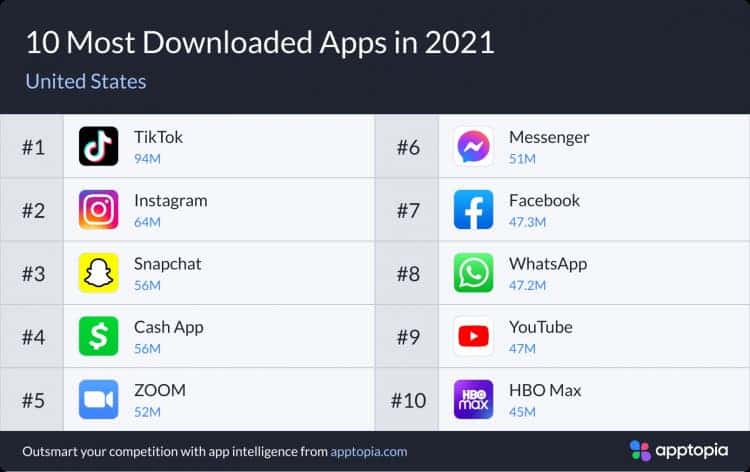 Apps like Spotify and Telegram failed to make it to the American list, but YouTube, HBO Max and Cash App did. Nevertheless, the TikTok service has retained its leading role here as well.

Cloudflare has published a rating of the popularity of Internet resources in 2021. It shows that the outgoing year was marked by the shift of the permanent leader in the ranking in the face of the Google.com domain, which includes many of the services of the search giant. The new leader is TikTok.com, which ranked only seventh last year.

The ten most popular domains in 2021 are as follows:

Last year, the balance of power was as follows:

For the first time this year, TikTok took the lead on February 17. There were also several days in March and May when this domain was at the top of the rating. But after August 10, TikTok became the undisputed leader. There were still days when Google’s position was stronger, but there were very few of them in the second half of the year. In general, with the exception of the rise in popularity of TikTok, the balance of power has remained practically unchanged.