Another year has started, and Realme continues its push for Android 12-based Realme UI 3.0. The company is slowly, but proceeding, with its update plan that will bring a set of new features and visual changes for its smartphones. Just recently, the company has unveiled a big update for the Realme GT 5G in India. To recall, the Realme GT 5G was the company’s very first flagship of 2021, and the only Snapdragon 888-powered smartphone released by the company in that year. Now, the company is moving forward to bring the update to another device in the premium GT series, the Realme GT Master Edition.

Today, the Realme GT Master Edition has just entered the Android 12-based Realme UI 3.0 early access beta program. Those interested in trying the Realme UI 3.0 can enroll in the early access program by heading to their Realme GT Master Edition’s Settings >> Software Update menu. They’ll click on the Settings icon in the top-right corner, and click on Trial version > Early Access > Apply Now, and submit the requested details. As soon as your device gets accepted, you’ll receive the OTA update. Of course, the “Early Access” status of this update means that not everyone will be selected for the beta-testing. 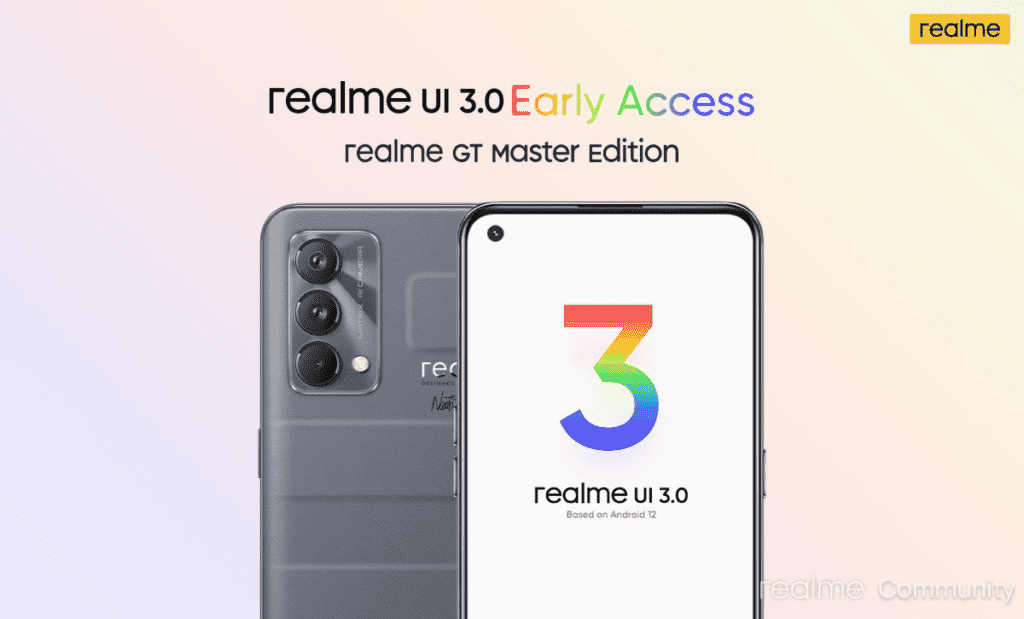 Realme didn’t mention a deadline for applications. However, if you want to ensure a seat it’s better to do your application as soon as possible. Before proceeding, make sure your Realme GT Master Edition has at least 10 GB of Internal Storage and at least 60 percent of battery juice. The device needs to be on  RMX3360_11_A.08 firmware to get the new update. However, the company promised to support version RMX3363_11.A.09 pretty soon.

As you may expect, the early access build is far from stable and should come carried with bugs and issues like battery drain and etc. So, if the device is your daily driver, it may not be a great idea to flash this update. According to the company’s roadmap, there are 17 smartphones next in line to get Realme UI 3.0 early access. Nine devices will get the update in the First Quarter of 2022 (January to March) and the remaining devices will get it by the second quarter of 2022 (April to June). So, if you’re in a hurry for Android 12, it’s better to calm down and not hold your breath depending on your Realme smartphone.