At the Realme’s new product launch conference tonight, Xu Qi, Realme’s vice president announced the Realme brand’s performance in 2021. According to him, the Chinese company has a shipment of over 60 million units in 2021. Furthermore, Realme is in the top five in 21 smartphone markets globally. Furthermore, the company ranks first in the Philippines, second in China and sisth globally. In the 5G market, Realme records the highest growth rate amongst 5G Android phone brands. Its sales of over 60 million represents a growth rate of 50%. 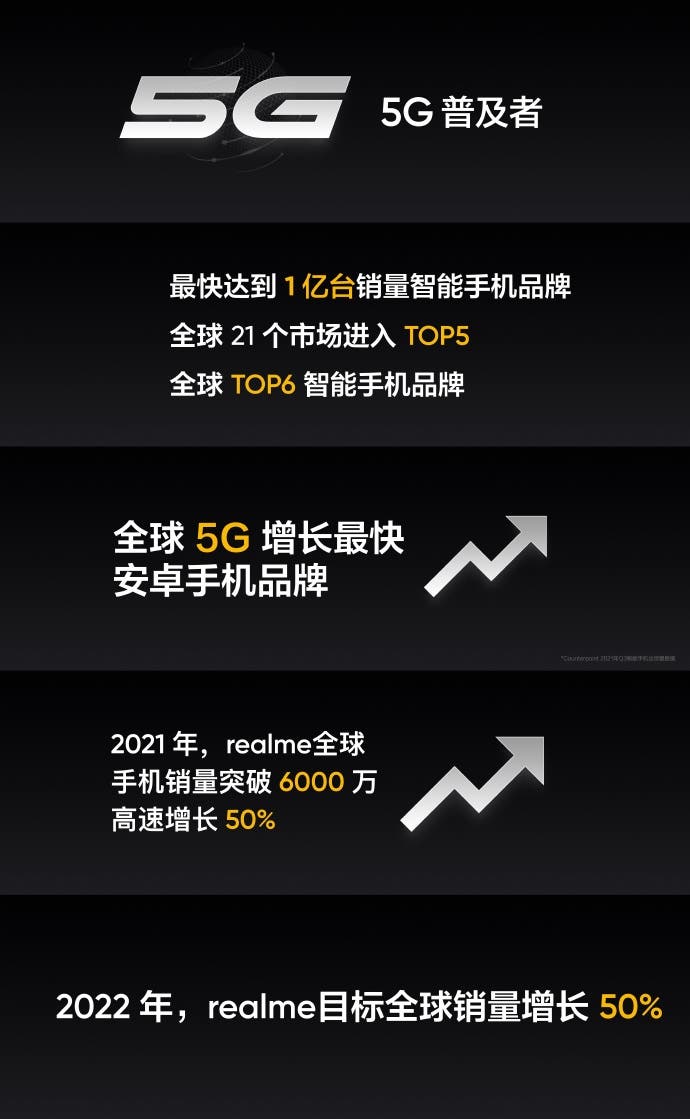 Regarding its 2022 goal, Realme claims that it will continue to grow by 50% this year. The company believes that its shipment volume will reach 90 million units. The target for the Chinese manufacturer is to hit 100 million sales.

In addition, Realme also talked about its global layout goals, focusing on the Chinese market and the European market to become the future growth engine. In terms of technological innovation, Realme stated that it will spend 70% of the company’s R&D expenses on high-end technology research and development. The company will also enhance its software and hardware capabilities, as well as the overall product experience.

At the same time, Realme will also cooperate with new global trend forces to continue to polish product design and build the most fashionable brand in the technology industry.

Realme has only been in the market for a few years but its user base is now well over 100 million. Realme’s smartphone business is strongest in India. This is not surprising, because the company was born precisely in order to battle Redmi products in India. Yes, it has not yet been possible to bypass the competition, but it has a very strong potential.

The company also feels good in the European market. A number of analytics companies ranked it in the top 6 of the largest smartphone makers and recognized that it has become the fastest growing brand in the region.

Naturally, this is just the beginning and the company intends to further increase its presence in the market. The next target is to sold 200 million smartphones to by the end of next year, and for the entire 2023 Realme plans to sell 100 million handsets. 5G-smartphones should become the engine of sales of the company. It continues to build its ecosystem, where, in addition to mobile devices, headphones and wearable devices, there will be a place for tablets, laptops, TVs, external batteries and other “smart” gadgets.