As a new rugged flagship from Blackview, the Blackview BV8800 brings a few new upgrades. In terms of  durability, smoothness, camera and overall performance. And has everything to impress you, no matter what you’re using it for. Outdoor enthusiasts will be impressed by the upgraded toughness with the MIL-STD certification upgraded to MIL-STD-810H. While shutterbugs will love the trendy camera features and useful night vision of the BV8800. Most of all, the Blackview BV8800 is equipped with brilliant specs, that feel much more high-end than its price tag would suggest. 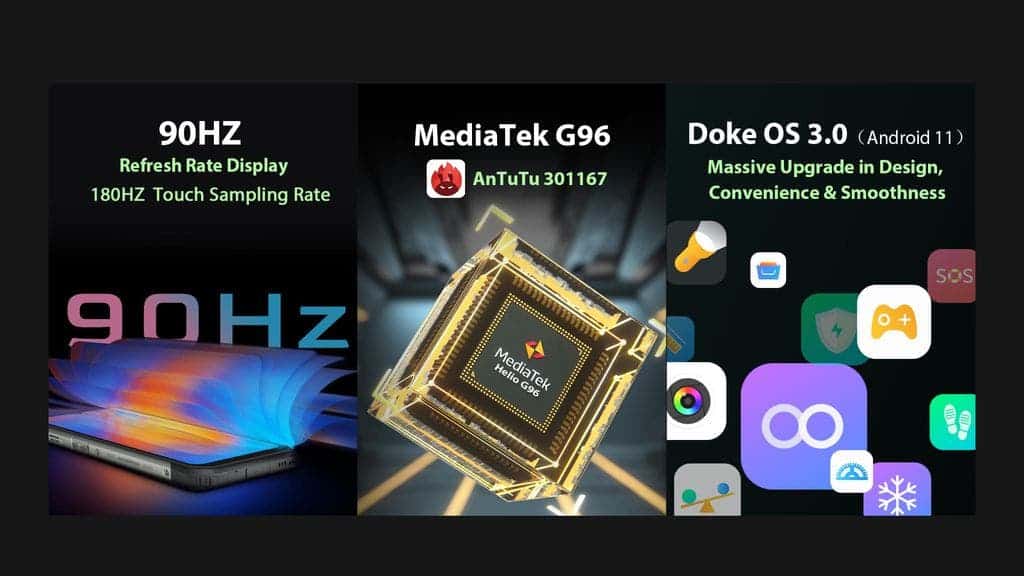 While most rugged phones use a 60Hz refresh rate display, the BV8800 steps up the game by sporting a 90Hz display. Everything looks much smoother and snappier, especially with fast-motion content, such as video and gaming.

And the BV8800 brings to the table the top-end 4G octa-core chipset, MediaTek Helio G96, leaving other 4G competitors behind. Based on the AnTuTu benchmark, Helio G96 scores 301167 points, quite close to the 337945 point of 5G  MediaTek Dimensity 800 chipset. Coupled with fast 8GB LPDDR4X RAM and 128GB UFS 2.1 storage, the user can expect superior performance in data processing, multi-tasking, response time, and vivid visuals. And 3D copper pipe liquid cooling technology keeps the phone running cool, as the performance ramps up.

Running on the newly-launched Doke OS 3.0 (based on Android 11) is a huge bonus too. It brings a massive overhaul over the Doke OS 2.0, including more intuitive gestures to navigate, smart app pre-loading, more user-friendly design or an upgraded notebook app, supporting recording, handwriting, reminding and encryption. It’s safe to say the system is quite up to par with the top-notch performance of bigger brands.

More user-friendly designs for ultra smoothness include a fingerprint sensor & power button 2-in-1 key for more speedy unlock, customized function button for 7 function shortcuts and quick access to your favorite app or  multi-function NFC for cash-free payment and great sound quality of the speaker.

Photos and videos are possible even in complete darkness 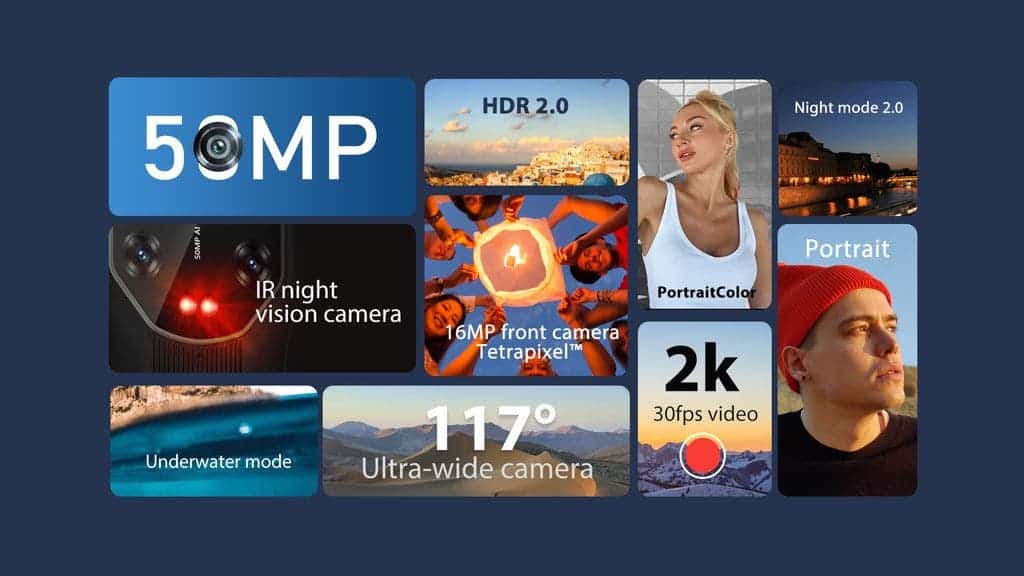 The 20MP IR night vision camera is backed by two IR LEDs and makes wonders for photos and videos even in complete darkness. It can be helpful for example to safeguard your home, turn it on and you’ll immediately know, if your house is being watched by burglars without alerting them. For people, who travel and rent a lot being dead serious about your privacy, the night vision can be a blessing by detecting a pinhole camera, if there’s one.

More camera modes include HDR, Night mode, PortraitColor or Underwater mode. The BV8800 also supports cinematic 2k video recording with 30 frames per second. So you can capture your favorite moments in stunning detail, just as you remember them. This highly unified camera system can back you up to shoot in any conditions. No matter if day or night, wide or ultra-wide, on land or even underwater.

Adventure with BV8800 gets more carefree and safer 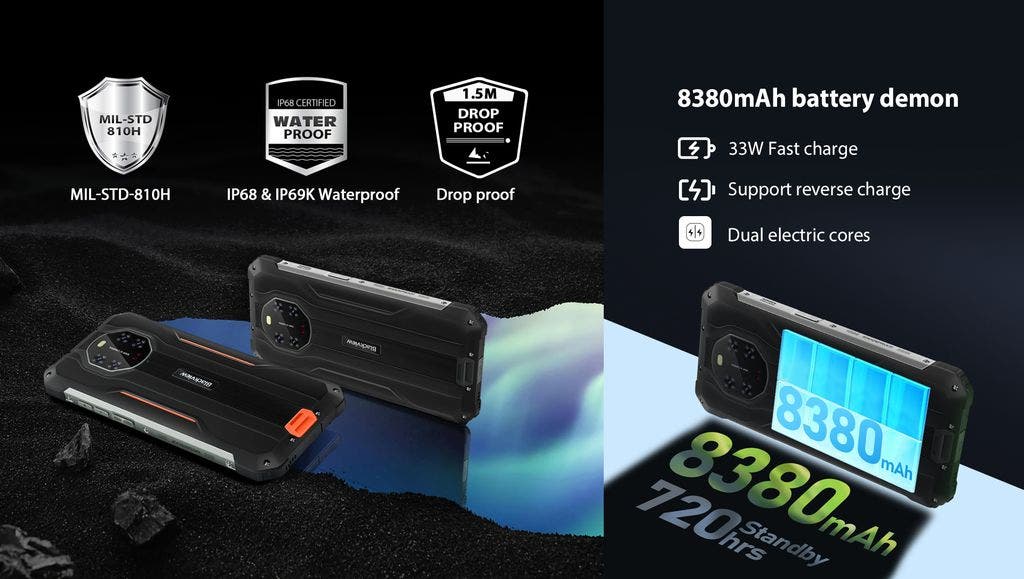 As an outdoor adventure phone,  the Blackview BV8800 won’t fail to impress you either. After all, Blackview rugged phones are battle-tested over long years. It can withstand even the most severe environments. And the Blackview BV8800 goes out of its way in the resistance to water, rains, dust, drops or bumps by ascending to MIL-STD-810H, the latest revision of MIL-STD-810. Which includes numerous changes from its predecessor, MIL-STD-810G. And like its counterparts, it meets IP68 & IP69K waterproof ratings.

Blackview BV8800 can enhance personal safety too, if you’re doing a little adventure in nature- As it can let you see in complete darknes. For example it can help avoiding danger by detecting wildlife, navigate your way back to the campsite if you ventured out too late or find lost party members. All even in the darkest night. 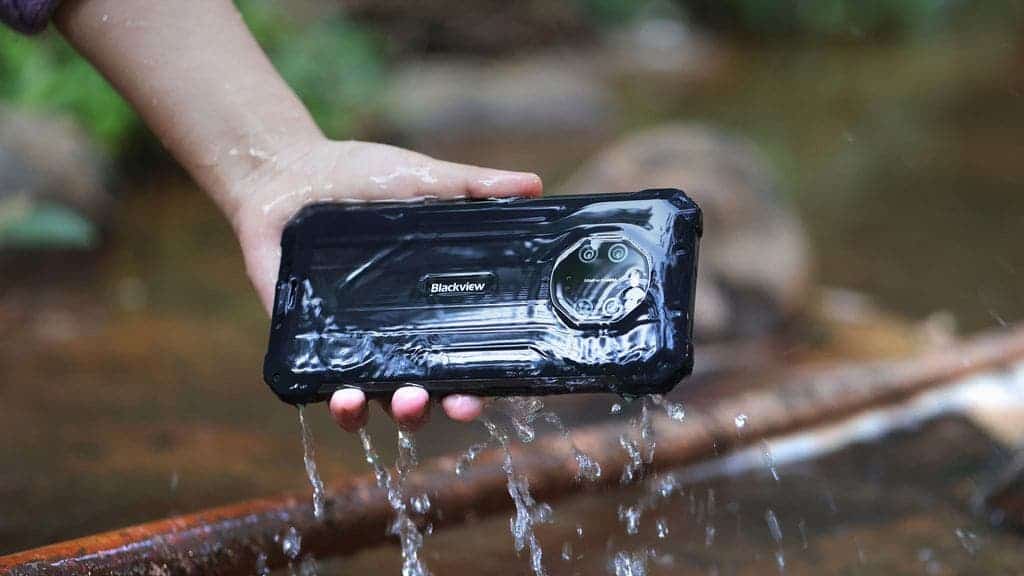 But Blackview BV8800 is also reliable with a 45% above average capacity of battery. Sporting big 8380mAh battery, which can last in 4G/WiFi off standby time up to 720 hrs (30 days) or playing music up to 34 hrs. It can just support you for long days on average use. Once it runs out of juice, the 33W fast charge takes only 1.5 hrs to refill the giant battery again.  And with the reverse charging function, the BV8800 can also serve as an enormous 8380mAh power bank to offer juice to your company’s device on the go. The Type-C charging port makes it easier to plug too.

Other outdoor features you’ll find useful include air pressure sensor for hiking and mountaineering activities, GPS & GLONASS & Beidou & Galileo for more accurate navigation or a lanyard hook for keeping your smartphone safe, while venturing into the wildness. 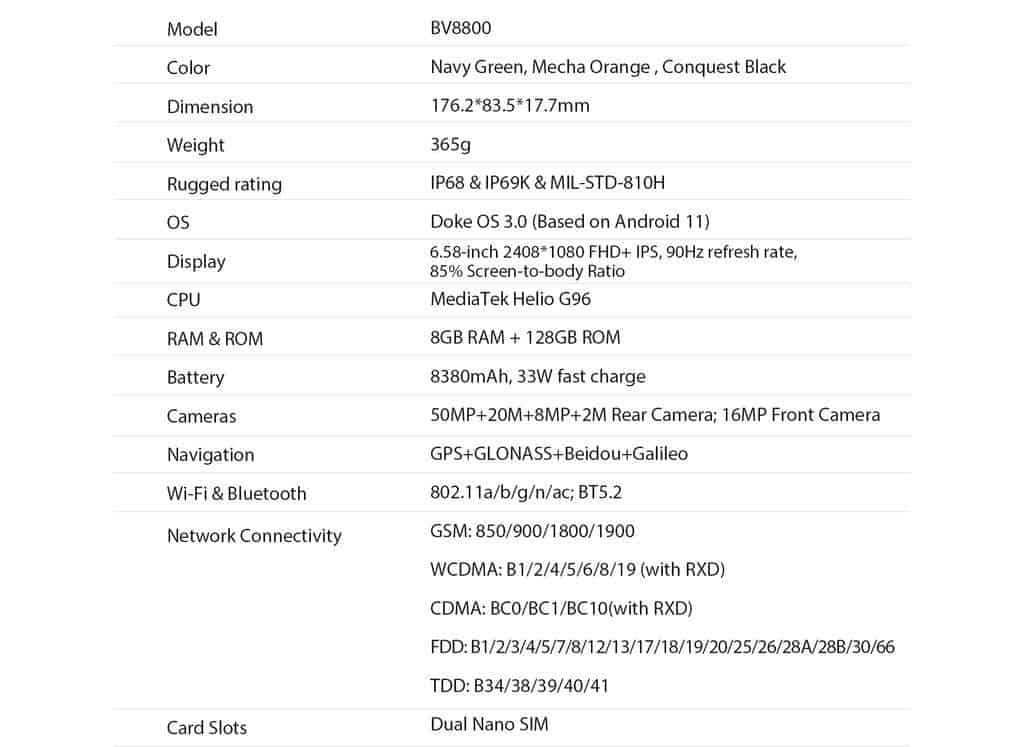 To sum it up, the Blackview BV8800 is powerful enough to be on par with many full-fledged phones and tough enough to withstand any unexpected outdoor usage. If you would be interested in this rugged monster, then click here to snap up the early bird offers. Before it runs out…