Research firm Canalys said yesterday that computer shipments were up 15% in 2021 over the previous reporting period. IDC analysts also have their own statistics. According to them, last year the PC market grew by 14.8%. It is noteworthy that shipments of desktops, laptops and workstations have reached a record value since 2012 – it was then that there were comparable sales volumes, and then began a long-term decline.

According to IDC, in comparison with 2017, which became the worst year for the computer market, shipments grew by 34% to 349 million copies (341 million according to Canalys statistics). This is an excellent metric for a sector that investors have long viewed as pretty depressive since smartphones became the most important and mainstream product in the electronics market.

The market recovery was actively promoted by numerous lockdowns associated with the COVID-19 pandemic; thousands of households and companies bought new laptops and PCs for distance learning for schoolchildren and organizing remote work. It is notable that the hype happened in the year of the most acute chip shortage; affecting most industrial sectors in the world. 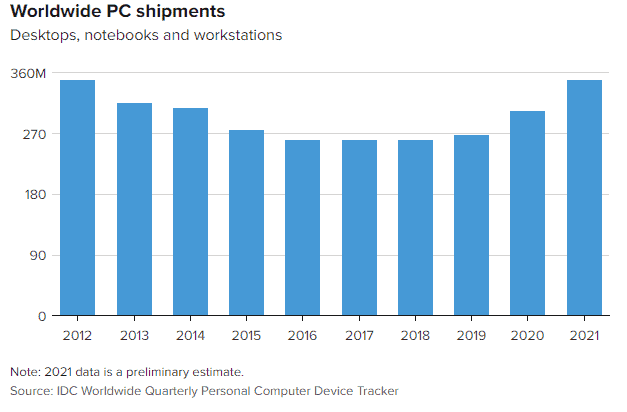 Some experts predicted that large computer sales would not continue after the pandemic was over. According to IDC forecasts, in 2022, a slowdown in sales will take place in this market. Nevertheless, many manufacturers remain optimistic, expecting that PC sales growth will continue in line with the current trajectory.

According to Rahul Tikoo, senior vice president of Dell Client Product Group, the world is moving from a model in which there is one computer per household, to a model in which everyone has a computer, by analogy with smartphones, and such patterns of shopping behavior will continue in the future. According to IDC statistics, Lenovo, HP, Dell, Apple, ASUS and Acer became the largest suppliers of computer equipment by the number of copies sold in 2021.

Another beneficiary of the explosive growth of the market was Microsoft; whose operating systems are installed on most computers in the world. Although the software giant has recently shifted its focus to cloud services like Azure; Windows is still an important part of the business; with OS sales reaching $ 5.68 billion in the third quarter alone, up 10% from the same period in 2020.