There have been mixed reactions regarding the upcoming Exynos 2200 SoC. This processor is supposed to be a flagship chip in the level of Snapdragon 8 Gen1 and Dimensity 9000. However, recent speculations suggest that this chip will not be at their level. According to reports, Samsung will postpone the release of this processor and it will not make an appearance on the Galaxy S22 series. This is a deviation from the norm for Samsung. It means that the Galaxy S22 series will use only a Snapdragon processor. Nevertheless, Samsung has a long list of devices that can use this chip in the future. 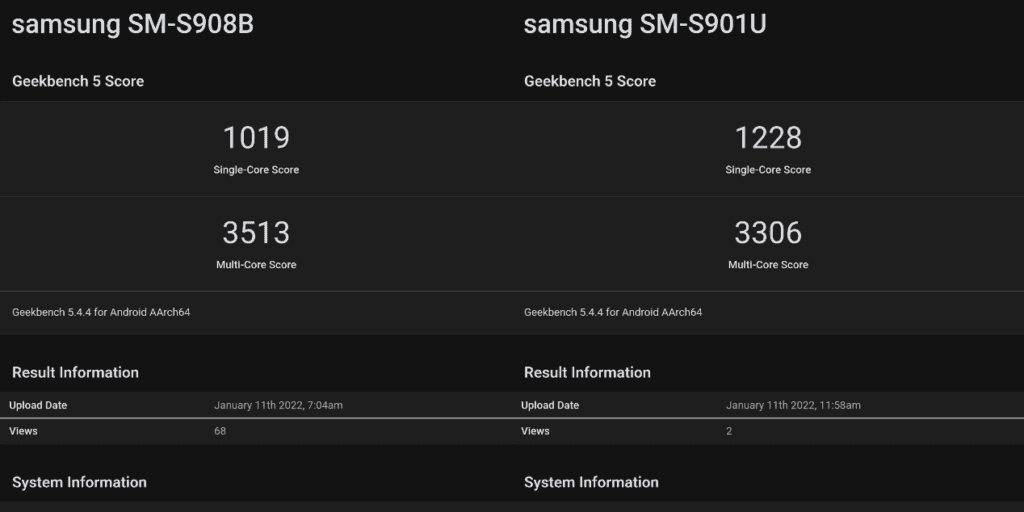 In the image above, Samsung Exynos 2200 score is on the left while the Snapdragon 8 Gen1 is on the right. The previously exposed Exynos 2200 score has only 691 points for the single-core and 3167 points for the multi-core. However, this is only an engineering model which explains why the result lags behind the Snapdragon 8 Gen1 and the Dimensity 9000. Furthermore, a source claims that this score does not consider the Cortex-X2 ultra-large core. This explains why the processor of the same ArmV9 architecture will produce such a difference in running scores.

Exynos 2200 is a flagship processor with some challenges

The GPU uses the AMD-authorized RDNA2 architecture. Originally, Samsung was very optimistic about the development of this architecture. However, it has been recently reported that due to the high frequency of the GPU, the heat of the mobile phone has been seriously affected. Samsung had to lower the frequency, and it could only stabilize to 1.29 GHz. However, the performance did not meet Samsung’s expectations, and there was a problem with the coordination of various departments. For this reason, the release date of the Exynos 2200 has been official postponed. As of now, there is no information regarding when Samsung will officially launch this processor.

Next Motorola Moto G22 appears on Geekbench with disappointing specs