Musk had expected Tesla to hit the Indian market in 2019, but it still hadn’t happened three years later. Earlier on Thursday, Musk said in response to a user who asked via Twitter when Tesla vehicles would be available in the Indian market said, “still working through a lot of challenges with the government” 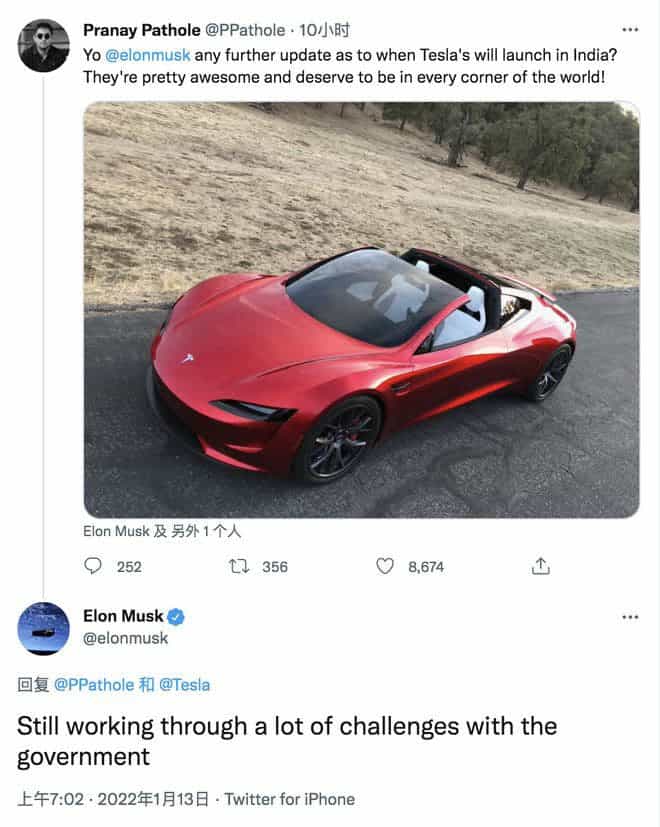 Negotiations between Musk’s Tesla and the Indian government have been going on for years. However, talks have stalled over issues such as building a local factory and import duties. There are reports that India’s import tariffs are as high as 100%. The Indian government has also asked Tesla to increase purchases in the local market and submit detailed production plans. Musk has called for lower tariffs so Tesla can sell imported cars at lower prices in India, where consumption levels are lower.

In October, an Indian minister said he had asked Tesla to avoid selling imported cars in the Indian market. The minister also urges Tesla to build a local factory to make, sell, and export cars. Populous India is a very promising market for EV makers. However, the market still has a lot of cheap cars from the likes of Suzuki and Hyundai. These cars are mostly “Made in India” products.

Recently, Musk issued a relatively pessimistic view on the economic situation in 2022. In other words, Elon Musk predicts that an economic crisis (or a financial crisis) will occur within a year. However, he didn’t get into details to explain why he thinks so and whether there will be something like a Great Recession or only something “ordinary”.

Predicting macroeconomics is challenging, to say the least. My gut feel is maybe around spring or summer 2022, but not later than 2023.

Interestingly, Musk made this comment under a tweet discussing global unicorn companies. The author posted a list of unicorns and asked how many unicorns will survive in 5 years. Musk’s answer reads that if history can be used as a reference, then not many people (companies) can survive the next recession.