Realme has recently released new flagship smartphones in the form of the Realme GT 2 and Realme GT 2 Pro. However, these devices are still limited to the Chinese market. Meanwhile, the company is busy with the launch of its Realme 9i in international markets and the imminent release of the other Realme 9 smartphones such as the vanilla Realme 9, the Realme 9 Pro, and the rumored Realme 9 Pro+. Despite this, the company is still finding time to prepare the terrain for a new smartphone under its Realme C-series. A new smartphone dubbed Realme C35 is getting ready for release, and Realme keeps acquiring the necessary certifications for this launch.

Interestingly, the Realme RMX3511 has passed through the Geekbench benchmark during the last week. Thanks to the popular benchmarking website, we know what we can expect from the device. The device will pack with the Octa-Core Unisoc Processor. 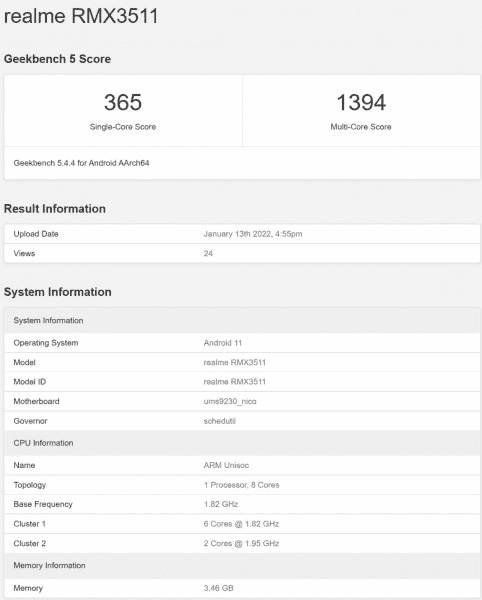 Once again, Realme is partnering with the Chinese chipset manufacturer. Unisoc is growing in popularity being used in a wide array of smartphones. It may occupy a relevant place in the market in the upcoming years. The chipset probably has two ARM Cortex-A75 cores six ARM Cortex-A55 cores and a Mali-G52 GPU. The device comes paired with 4 GB of RAM. However, other RAM variants may also be in the works.

Unfortunately, there is no word on the release time for the Realme C35. However, we may hear more details soon. The device is bagging several certifications, so we can assume that it’s just a matter of time until we get a confirmation for this launch.

The new Realme C-series may get a release in the coming weeks. Realme usually does a quiet launch for these devices, and they usually focus on key markets like India, Indonesia, and Thailand.

As aforementioned, Realme is also preparing for the launch of more Realme 9 smartphones. The company is expected to bring great advancements this time around with a powerful Realme 9 Pro+ variant that could be powered by the Snapdragon 870 SoC. The company will also bring its Realme GT 2 and GT 2 Pro to the International markets.

Previous Vivo Pad specifications and price have been tipped