WhatsApp developers are finally close to implementing the transfer of chat history between iOS and Android devices. This is evidenced by the source code of the beta version of WhatsApp 22.2.74 for iOS.

Judging by what the researchers were able to find in the messenger code, transferring chat history between devices on different operating systems will not be a trivial task. WhatsApp must be installed on both devices, after which you can transfer using a cable or a specially created private Wi-Fi network. By comparison, other messaging apps can store and sync user data using Google Drive, iCloud, or their own servers.

Currently, there is only one way to transfer WhatsApp data between iOS and Android devices. We are talking about migrating from an iPhone to a Samsung Galaxy smartphone using a USB cable and the Samsung SmartSwitch app. 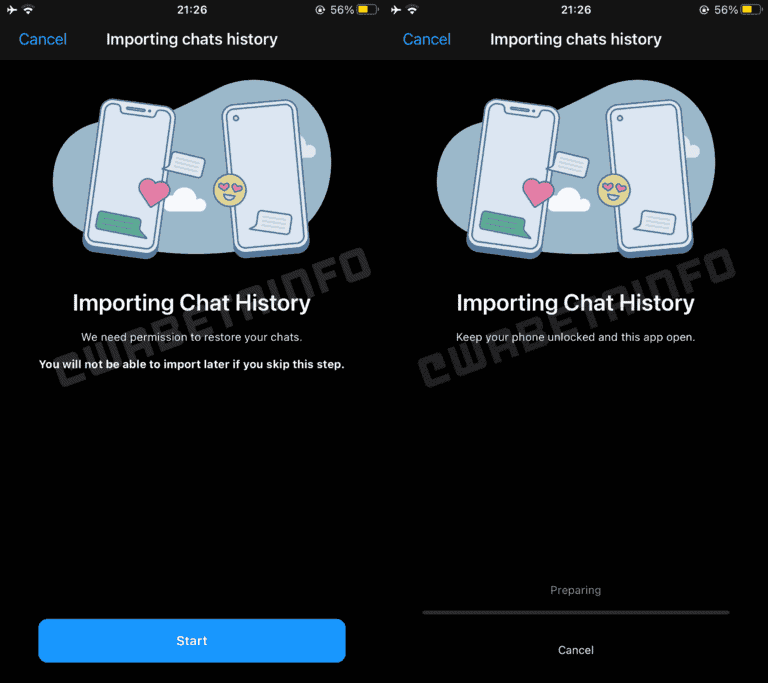 As with Facebook and Instagram, Meta regularly enriches WhatsApp with new features. Several new features are to come. We recently relayed in our articles the upcoming arrival of a function allowing you to listen to voice messages again before sending them or to listen to those you have received, even when the application is in the background. Meta would also have planned to completely revise the interface dedicated to these voice messages. Its main interest will be to facilitate the use of group calls.

And it continues at the beginning of the year. Indeed, WhatsApp has recently released a new beta version of its application for Android. It has the version number 2.22.3.5. And it reveals new features that will be used to edit images and videos. We owe this information to the WABetaInfo site which had the opportunity to try it before sharing an illustration image. Two tools are thus revealed: new brushes and a function to blur images.

So far, WhatsApp only offers one brush in its built-in editor. In the beta version, there are now three: fine, medium and coarse, quite simply. It comes in addition to the line color change option already available. Of course, this may seem fair compared to the photo editors that you find natively in the smartphone. But it can bring some benefits. The second novelty is not entirely new, since it is already available in the iOS version of WhatsApp. This is the blur option.

Next Vivo shared the results of 2021: success and new milestones