The Samsung Galaxy SM-E236B that has arrived on the Geekbench benchmark database could be the Galaxy F23, according to the publication. Alternatively, Samsung is likely to launch the same device as a rebranded version of the Galaxy M23. As expected, the Samsung Galaxy F23 5G Geekbench listing divulges some key specifications of the upcoming handset. For instance, it confirms that the phone will pack a Qualcomm Snapdragon 750G SoC under the hood. Let’s check out the rest of the details.

The Samsung Galaxy SM-E236B has made an appearance on Geekbench 5 database. The listing reveals the device’s single-core and multi-core scores. The device secured 640 points in the single-core, and 1820 points in the multi-core rounds of the benchmark test. Aside from that, the listing confirms that the Samsung Galaxy F23 5G will pack a processor codenamed “lito.” This is probably a Qualcomm Snapdragon processor. Furthermore, the listing hints at the presence of the Qualcomm Snapdragon 750G chip. 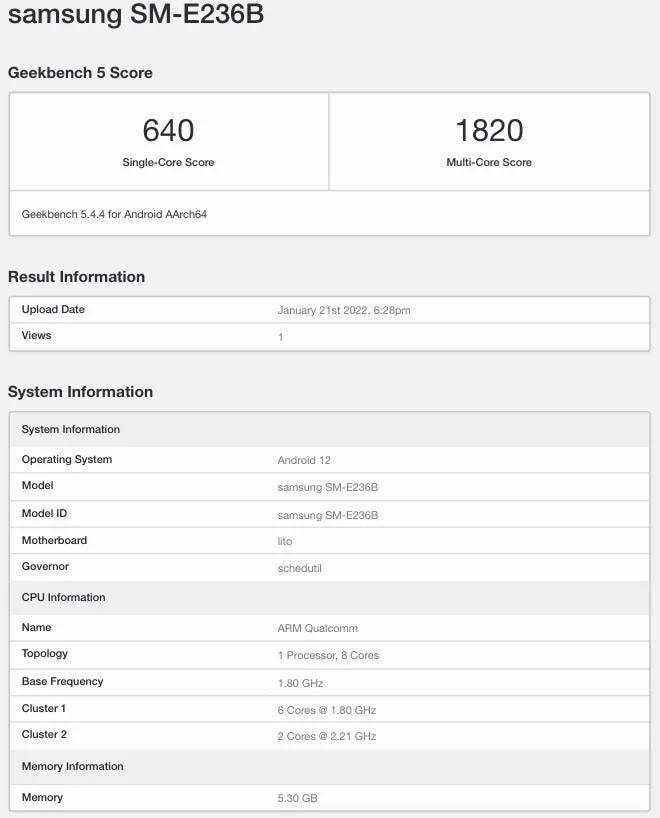 The aforesaid processor currently powers up the likes of Samsung Galaxy A52 5G, Xiaomi Mi 10i, and the OnePlus Nord CE. To recall, the Snapdragon 750 has an integrated X52 modem that enables 5G connectivity. Aside from that, the Geekbench listing reveals that the phone will pack a highly competent Adreno 619 GPU. The device’s benchmark database confirms the availability of 6GB of RAM as well. However, Samsung is likely to offer the phone in several other configurations at launch. Also, the phone runs Android 12 out of the box with probably the OneUI skin on top.

In 2021, the company launched the same phone like the Galaxy F22 and Galaxy M22. So, Samsung is likely to adopt the same strategy in 2022 as well. In other words, the company could launch the Galaxy F23 5G with the Galaxy M23 5G moniker in some regions. Moreover, it is worth noting that the device has arrived on a certification website for the first time. As a result, details about what the handset could offer are still scarce. Nevertheless, the phone could appear on other certification websites in the coming days, shedding more light on its specifications and design.

Samsung Galaxy F23 5G Specifications Have Been Tipped Before Launch