The upcoming Motorola Moto Edge 30 Pro smartphone’s official-looking design renders have popped up on the internet. Motorola is reportedly gearing up for the imminent global launch of its new flagship smartphone. Last year, Motorola launched the Moto X30 in China. Now, the word on the street is that the Lenovo-owned company is prepping to bring the X30 in the international markets with the Edge 30 series moniker.

Aside from that, past leaks claim that Motorola will be launching a device like the Moto Edge 30 Pro. In the meantime, the rumor mill has been churning a lot of speculations around the Motorola Edge 30. It will be the latest entrant in Moto’s line of flagship smartphones. The Ultra variant, in particular, has been subject to a lot of leaks in the past. However, a new Moto Edge 30 Pro leak (via MySmartPrice) includes design renders and some shreds of vital information about the upcoming handset.

Tipster Sudhanshu has shared the Motorola Moto Edge 30 Pro variant’s design renders, specifications, and other key details with MySmartPrice. The smartphone is reportedly headed to the global markets. Moreover, it could be a rebranded version of the Moto X30, which was launched in China. As expected, the global variant will have some minor changes as compared to the Chinese model. The Moto Edge 30 Pro global version carries model number XT2201-4. According to the tipster, the global Edge 30 Pro will feature an in-display fingerprint scanner.

To recall, the Chinese variant houses the fingerprint scanner on the side edge. Furthermore, the popular Motorola batwing logo is visible at the bottom left corner of the smartphone. Aside from that, the rest of the design elements are unchanged. The phone will probably launch in Pearl White and Black color options. The top center of the screen features a hole-punch cutout to accommodate the display. The oval-shaped rear-mounted camera setup houses three cameras. The right edge features the volume up/down and the power buttons.

Earlier reports suggest that the Moto Edge 30 Pro will pack a Snapdragon 8 Gen 1 processor under the hood. The phone’s Geekbench listing hints at the availability of 12GB RAM. Aside from that, the listing reveals that the handset will run Android 12 OS out of the box, with most likely, a layer of MyUX on top. Furthermore, the phone will reportedly sport a 6.7-inch POLED display with Full HD+ resolution, HDR10+ certification, and a 144Hz refresh rate. 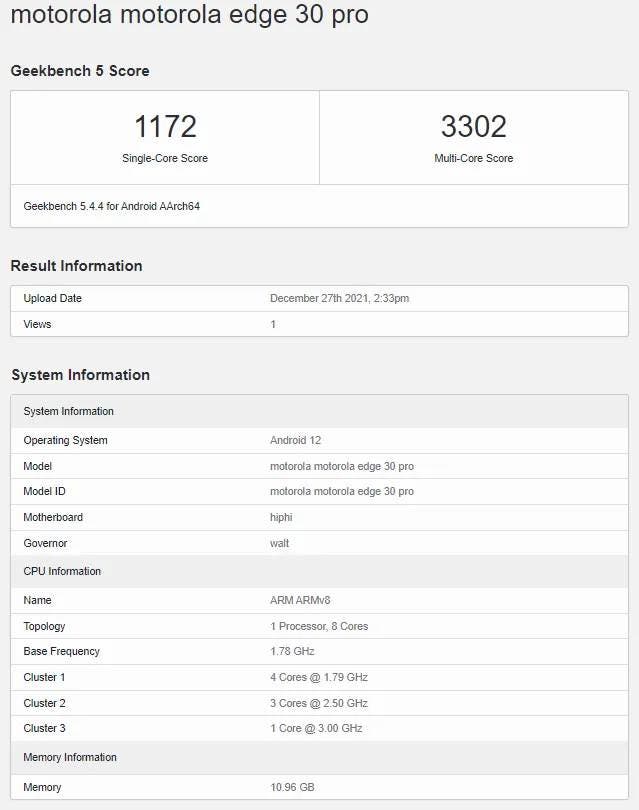 Moreover, the phone will be backed by a 5,000mAh battery that supports 68W fast charging. For optics, the handset could feature a 50MP main camera, a 50MP ultrawide lens, and a 2MP depth camera at the back. Upfront, the phone will probably feature a 60MP shooter for selfies and video calling.

Not too long ago, a report indicated that the Moto Edge 30 Pro could launch in a month or two. In addition to that, leaker Mukul Sharma claims that Motorola is currently putting the upcoming smartphone through some internal testing in select Asian countries. Another report by TechRadar suggests that the Motorola Edge 30 series could go official in Q2 of 2022. The report further claims that the lineup is likely to launch a year after its predecessor, the Edge 20 went official. In other words, the series could launch sometime in July.

Regrettably, details about the price tag the upcoming series will carry are still scarce. However, if the lineup comprises a standard, Lite, and Pro variant like last year, along with an Ultra model, the pricing range for the phones could be highly disorganized.