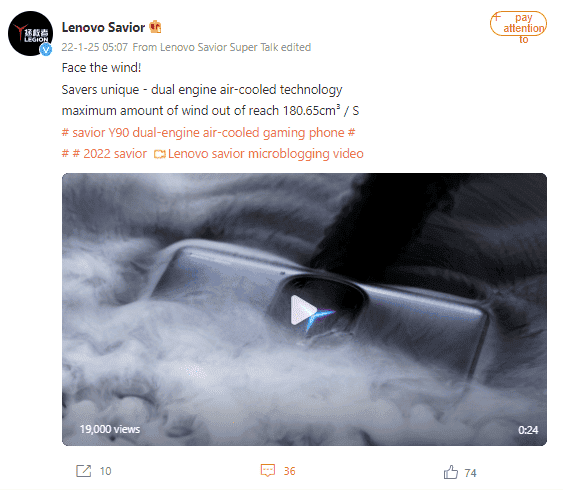 According to reports, in order to exert the ultimate performance of the Snapdragon 8 Gen1, the Lenovo Legion Y90 has a built-in active cooling turbo dual fan, and its backside frame has two fan outlets. Previous reports claim that the Lenovo Legion Y90 uses a 6.92-inch full screen. This display is a Samsung E4 OLED panel that supports a 144Hz refresh rate.

The Legion Y90 will be the first Snapdragon 8 Gen1 smartphone without a notch or punch-hole. Lenovo has previously used the dual turbofan supercharged liquid-cooled active and passive heat dissipation system. This design can achieve rapid heating reduction from the middle to both sides.

The company will most likely integrate a copper airtight duct. With the support of the unique T-shaped duct design, it can further extend the heat exchange time in the fuselage. This means that the system will take away more heat. As a new generation e-sports flagship, the heat dissipation performance of the Legion Y90 is worth looking forward to.

Also, Lenovo’s product director said recently that after playing a game at 122fps for 20 minutes, the phone’s temperature was 38.9 degrees. Due to the great heat dissipation, the hottest part of the phone was 38℃ after playing Honor of Kings in the 90Hz mode for 30 minutes.

Mobile gaming has been gaining momentum for several years. However, only a few manufacturers have been seriously making products for this niche. Among them, we can mention Black Shark (Xiaomi), ROG (ASUS), Red Magic (ZTE, Nubia), and Razer. However, there have been some vendors that were trying to make some competition as well. Lenovo is the best example. Unfortunately, its Legion Phone Duel series didn’t succeed in the past but the company is not giving up. Hopefully, the arrival of the Lenovo Legion Y90 will be a new dawn for the Chinese manufacturer.

Next Sony will entrust TSMC to manufacture iPhone 14 sensor chips