Social media platforms dawned, this Wednesday (January 26), full of posts from people who claim they were able to purchase products on Amazon for free. The curious issue involving the giant of e-commerce happened in Brazil. It allowed users to redeem a multitude of coupons and use them in the same purchase. This is not common behavior for the platform. In a normal situation, each discount code can be used only once. So it’s not possible to use more than one per order. The reports come from customers that bought games like Elden Ring and Horizon Forbidden West, which are still on pre-order. The exploit was also used in books, Echo devices, Kindle, and more. Some of the customers didn’t pay a single penny. 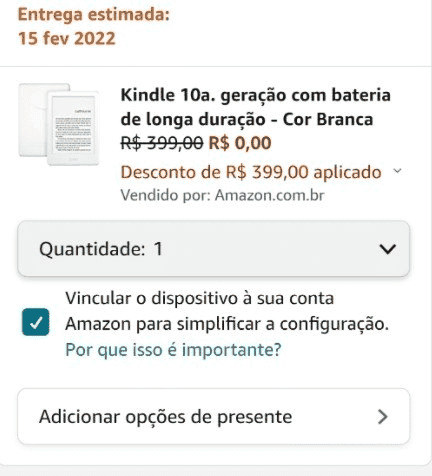 Another customer posted a print of the order confirmation screen with a discount on the total value of the Kindle. It also shows the delivery forecast of the purchase. There are also reports of people who managed to zero the value of a large purchase of books through the platform. Also, I’ve seen countless users saying they’ve purchased Elden Ring and Horizon Forbidden West for free or for a symbolic amount. These games are hotly anticipated and will make their official debut in the next month.

A list of almost 20 discount codes cycled during the social media in the first hours of January 26. A few hours later on that day, some of the coupons have stopped working. However, others have returned to only giving the regular discount for purchase. A large number of posts on Twitter about the error put the terms “Kindle”, “Amazon” and “Jeff Bezos” at the top of the social network’s trending topics list in Brazil during the morning.

The local media has contacted Amazon to understand the case. The Brazillian branch of the giant replied: “There was an issue with our website that was quickly fixed. We apologize for any inconvenience caused and will be in touch with the impacted customers”.

For now, there is no word from customers if they’ve been contacted by Amazon to clear the situation. It’s unclear if the company will honor these purchases or will deliberately cancel all of the orders made with “exploitation”.