Apple rolled out the iOS 15.4 beta to testers with a bunch of novelties. The new operating system will introduce support for EU Covid-19 Vaccine Certificates. Furthermore, it will enhance Face ID to detect one person’s face even when wearing a mask. The update also will bring a bunch of other features and fixes. Also, the company rolled out watchOS 8.4 update today for eligible Apple Watch devices. The update comes with the usual security patches, but the spotlight is on a particular feature: It addresses the dreadful issue preventing some Apple Watch Series models from charging properly.

The new watchOS 8.4 update is rolling out for the Apple Watch Series 3 and later models. If you own any of the supported smartwatches, you can easily download the update through the Apple Watch app on the iPhone by navigating to the General >> Software Update menu. Worth noting, that for proper installation, you’ll need to have at least 50 percent of the battery remaining to install the update. The device needs to be placed on a charger while also being within the connected iPhone’s range.

watchOS 8.4 address the issue with Apple and third-party chargers not charging the smartwatches

In addition to the watchOS 8.4, Apple has also rolled the first beta of watchOS 8.5. The new firmware may reach the eligible wearables in the upcoming months. For now, it’s up to testers to find out the issues in this update. However, the company itself already confirms that Siri may not properly recognize the user’s speech on Apple Watch Series 3. 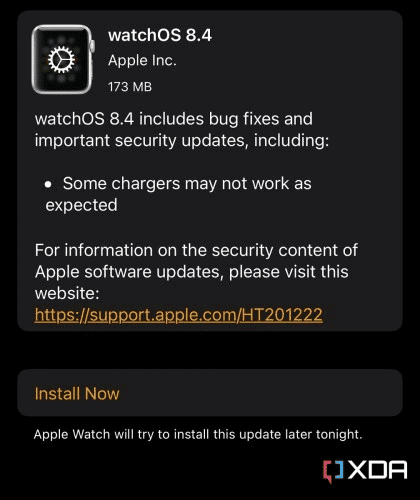 Worth noting that users have been complaining since the watchOS 8.3 update. According to the reports, some Apple Watch Series 7 users have noticed that their third-party chargers, and in some cases, Apple chargers, were not able to charge their Apple Watches. In some situations, the Apple Watch would not charge at all with an affected charger. In other cases, it would charge for a few minutes and then stop.. Now, hopefully, all supported chargers will work properly as the update is rolling out to fix this once and for all.

Apple will keep ironing watchOS 8 until the watchOS 9 release. It is expected sometime in June or July, during the company’s WWDC 2022. The new watchOS 9 update may get its official debut only in September with the upcoming Apple Watch Series 8 models. Talking about the smartwatches, we expect big upgrades, and rumors point out to the arrival of the company’s blood glucose reading monitor.