Information on Tesla’s official website shows that the company is voluntarily recalling some Tesla Model 3 cars. This recall applies to models that were manufactured between the period from October 4, 2018, to November 20, 2019. It also involves some Tesla Model 3 with production dates between October 14, 2019, and December 27, 2020. 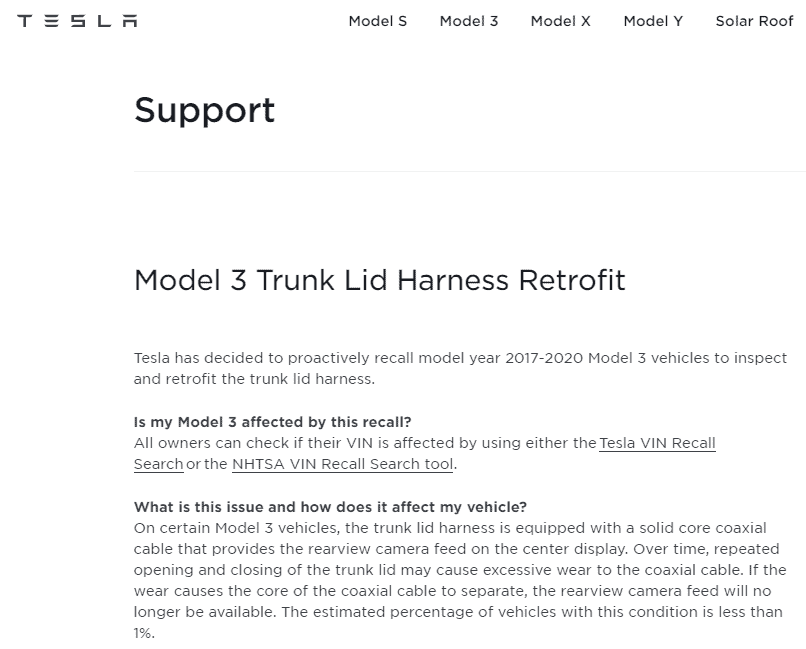 According to Tesla’s official description, the trunk lid harness of the Model 3 cars comes with a solid coaxial cable. This cable makes it possible for the rearview camera to display its feed on the center display. Due to the continuous opening and closing of the trunk lid, this coaxial cable may wear out significantly. This wear and tear may cause the coaxial cable to separate and this will cause the rearview camera to not provide its feed on the center display. This can significantly affect the driver’s vision when reversing. However, Tesla estimates that the percentage of cars with this issue is less than 1%.

Tesla has not received reports of injuries or crashes in this situation. Due to the large number of recalls involved, Tesla needs to make overall arrangements for related work. After the preparations are ready, the service center will take the initiative to contact users. At present, a number of car owners have received Tesla’s recall notification SMS.

Tesla will not launch a cheap model this year

Analysts believe that Tesla will be making a huge mistake if it fails to launch some cheap models. According to Guggenheim analyst Ali Faghri, Tesla will lose huge revenue in the next 10 years if it can’t launch a $25,000 model on the market. He added “In the mid-2020s, entry into the low-priced vehicle market will be critical to support Tesla’s growth prospects,”