According to the practice of previous years, Apple will hold the WWDC22 conference in June this year. At the event, the company will officially unveil the iOS 16 system. However, a leakster (@LeaksApplePro) recently released the design of the system page that is suspected to be iOS 16. According to the screenshots, the widgets of iOS 16 will be further upgraded with richer functions. 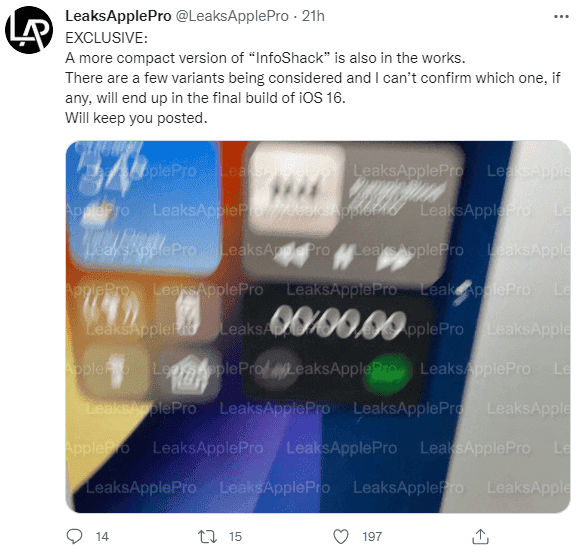 It is understood that iOS 16 will have more feature-rich interactive components, which Apple will name InfoShack. Through this set of components, users can access contact information directly on the desktop. Users can also adjust the screen brightness and even turn on the flashlight directly. Therefore, with this set of small components, we can further save the step of “slide control center”.

There is also news that a more compact “InfoShack” widget is also in development, and it has not yet been determined what shape Apple will launch. However, it is certain that iOS 16 will provide richer functions to further enhance the user experience.

Previous reports claim that iOS 16 will bring major changes and will cancel support for some models. From this point of view, iOS 16 should come with the biggest system upgrade in recent years.

Models that will support iOS 16

iPhonesoft claims that Apple’s iOS 16 plans to drop support for the iPhone 6s, iPhone 6s Plus, and the original iPhone SE. It means iPhone SE 2, iPhone 7, and above iPhone will get an iOS 16 upgrade.

Of course, this is not official news yet. Apple will announce iOS 16 at WWDC 2022 when it will announce the specific upgrade support list. In terms of accuracy, iPhonesoft’s reports have different ratings. In the past, it has had some correct as well as wrong reports. For instance, it correctly reported the list of supported devices for iOS 13 and iOS 14 in advance. However, its reports on iPhone 6s and original iPhone SE not upgrading to iOS 15 were wrong.

If iPhonesoft’s report is correct, this means that iOS 16 will require the A10 chip as the minimum hardware spec to get the latest features. Still, this represents an incredibly long life for iPhones in terms of upgrades and maintenance. The iPhone 6s and original iPhone SE were first released in late 2015 and early 2016, respectively. This means they will receive regular software updates for over 6 years.