Market research firm Gartner said recently that the total chip procurement of IT manufacturers in 2021 will be $583.477 billion. This is an increase of 25.1% from a year ago. Apple gets first place by purchasing semiconductors worth $68.269 billion, an increase of 26.0% over 2020. In 2021, Apple’s performance in the smartphone and personal computer business is eye-catching. The iPhone 12 and iPhone 13 series have become explosive models. Apple is working hard to develop its own CPUs to replace those from Intel. 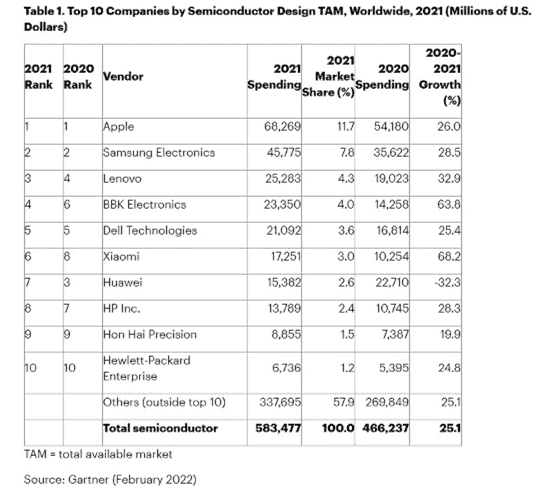 China’s Lenovo and BBK Electronics took third and fourth place respectively. Lenovo’s purchase volume was $25.283 billion, while BBK Electronics’ purchase volume was $23.35 billion. Their purchases increased by 32.9% and 63.8% respectively over the previous year. Lenovo, the world’s largest PC maker, increased its purchases of CPUs, GPUs, and memory. BBK Electronics sells smartphones under the Oppo, Vivo, and Realme brands, which are ranked fourth, fifth and sixth among the world’s smartphones.

Only Huawei reduced its chip purchases

Dell, Xiaomi, and Huawei follow closely behind BBK Electronics. Dell’s purchases were $21.092 billion, a year-on-year increase of 25.4%. Xiaomi and Huawei purchased semiconductors for $17.251 billion and $15.382 billion, respectively. Compared with the previous year, Xiaomi’s purchases increased by 68.2%, but Huawei’s purchases fell by 32.3%. Among the top 10 companies, only Huawei reduced its purchases.

There is a significant shortage of chips in the industry and this is causing major manufacturers to scramble for chips. According to reports, the chip shortages will continue until 2023. In the smartphone market, Apple has the most stable chip supply.