Adobe has just introduced the new Adobe Premiere Pro 22.2 with a set of improvements and changes. The major highlights include a three-times faster Speech to Text transcription, quicker 10-bit 4:2:0 HEVC exports, support for the new Canon EOS R5 C, and a new Remix Tool. The latter automatically rearranges the duration of music tracks in a seamless manner.

The new update for Adobe’s legendary software comes with a big focus in AI. The big new addition is the Remix feature which helps editors to save their precious time when cutting and pasting a music track. Moreover, there are significant upgrades in the Speech to Text transcription feature which now has offline use enabled. Let’s see what the new Adobe Premiere Pro 22.2 has in tow for enthusiasts and avid users.

The new update brings a massive improvement for the Speech to Text feature. The software, which also relies on AI can easily transcribe texts in a seamless manner to create captions with perfect timing. Sometimes, you’ll need to do minor adjustments, but that certainly is a time-saving feature. 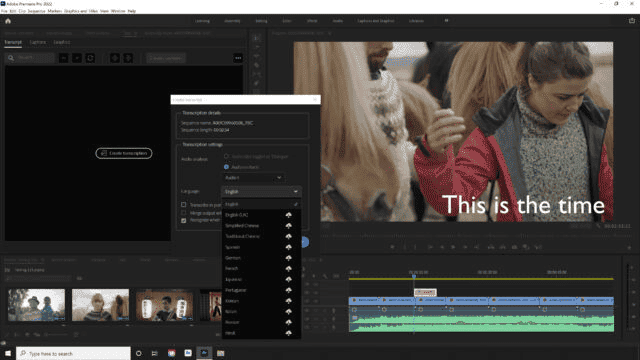 Intel states that this feature is getting even faster when working with Intel Core i9 and M1 processors. Moreover, it does not require an internet connection anymore. To do so, users are able to download up to 12 different language packages for offline transcription. Worth noting that English is the language installed by default.

The new feature promises to help Adobe Premiere Pro editors to save their time when rearranging the length of a music track for a specific duration. The software relies on AI-based Adobe Sensei technology to analyze the content of the track. Then the music structure is rearranged in order to match the new target duration. If users aren’t satisfied with the result, they can try an alternative remix adjust the new “Segments” and “Variations” sliders in the Essential Sound Panel.

Of course, this is still a beginning phase for the feature. The results may not be satisfactory for all tastes, but there’s room for improvements with new updates.

A ton of new improvements

The two major highlights are listed above, but Adobe Premiere Pro 22.2 update also brings other significant improvements. For instance, it ensures 10 x faster 10-bit 4:2:0 HEVC exports when working on Windows Systems packing an Intel or NVIDIA graphics card. Furthermore, the Linear Wipe and Block Dissolve transitions join a myriad of other GPU-accelerated effects.

If you already own a license for Adobe Premiere Pro, getting the 22.2 updates is a simple process. Otherwise, you can purchase a one-year subscription for around $240 at B&H.