The iQOO 9 Pro Indian variant has been spotted on Google Play Console and has been listed on Google Play Supported Devices. iQOO is set to launch the iQOO 9 series smartphones in India soon. The Indian iQOO 9 series will comprise three smartphones including the iQOO 9 SE, iQOO 9, and the iQOO 9 Pro. If rumors making the rounds online are anything to go by, these phones will be making their foray into the Indian market later this month.

Before launch, the iQOO 9 Pro Indian variant has popped up on the Google Play Console. Aside from that, the phone has made an appearance on the Google Play supported devices list. As expected, these listings shed more light on the phone’s key specifications and other details.

The Indian version of the iQOO 9 Pro has arrived on the Google Play Console and Google Play Supported devices list carrying model number I2022. According to the Google Play Console listing, the Pro variant of the iQOO 9 lineup will sport a Full HD+ (1,080 × 2,400-pixel resolution) display. This coincides with a report by BGR that claims the 9 Pro will not get a 2K display. It will come with an FHD+ display panel instead. Furthermore, this screen will deliver a pixel density of 440ppi. To recall, the Chinese iQOO 9 Pro model comes with a Quad HD+ (3,200 × 1,440-pixel resolution). In other words, iQOO will be making some minor adjustments in the Indian variant. 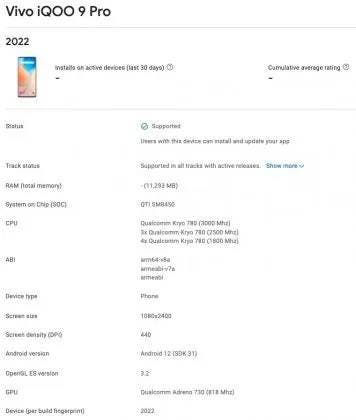 What Else To Expect

Aside from that, the listing confirms the presence of an octa-core Qualcomm Snapdragon 8 Gen 1 processor. Also, it reveals that the phone will pack an Adreno 730 GPU under the hood. Furthermore, the listing shows that the handset will ship with 12GB of RAM in the Indian market. The Indian version will boot Android 12 OS, as per the latest listing. Regrettably, the listing does not divulge more details about the handset. However, the word on the street is that the company will be launching earlier models in India. The Chinese versions of the iQOO 8, and 9 Pro will launch as the iQOO 9 and iQOO 9 Pro, respectively in India.

This piece of information was revealed in a teaser image at the recently-concluded BGMI India Series Semi-Finals. The iQOO 9 SE will reportedly come with the Qualcomm Snapdragon 888 processor. Likewise, past leaks shed light on the phone’s processors.. The iQOO 9, and iQOO 9 Pro will draw power from Snapdragon 888+, and Snapdragon 8 Gen 1 chipsets respectively. More vital pieces of information about the iQOO 9 series Indian variant smartphones will surface soon.