Motorola has revealed the Motorola Edge X30 way back in December last year. The flagship was a nice surprise since it was the first to be revealed with Snapdragon 8 Gen 1. We also saw a major bump for Motorola shipping 68W fast-charging and even an under-screen camera variant. Since December, Motorola fans across the global markets have been waiting for this handset. It will finally come in the form of a Motorola Edge 30 Pro. Today, the handset has passed through Bluetooth SIG certification which confirms it is a rebranded Motorola Edge X30.

As usual, the Bluetooth SIG certification does not come with a long list of specifications for the handset. However, thanks to the fact that the Motorola Edge X30 is already available in China, we know what to expect.

The Motorola Edge 30 Pro packs a Qualcomm Snapdragon 8 Gen 1 processor with up to 12 GB of RAM and up to 256 GB of Internal Storage. The 4 nm processor comes with the Adreno 730 GPU meaning excellent performance for games. 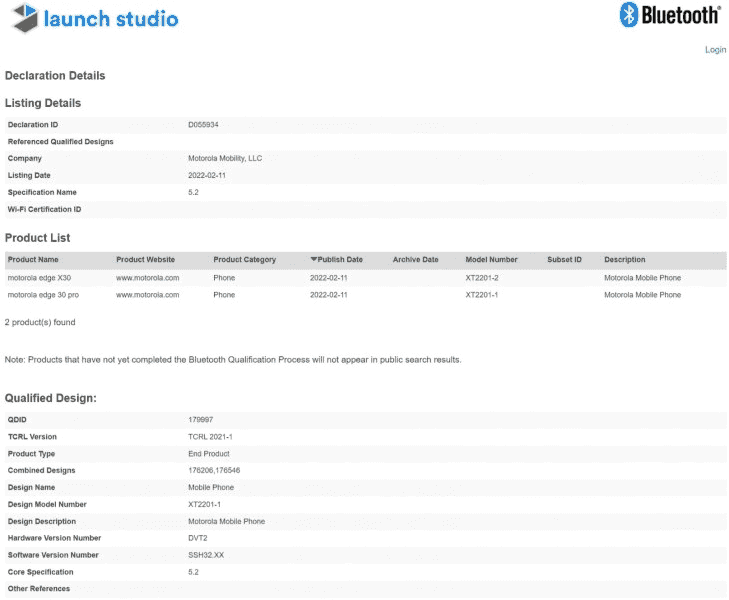 The specs come around a gorgeous 6.7-inch Full HD+ OLED screen with a whopping 144 Hz refresh rate. Until now, the Motorola Edge 30 Pro is the only Snapdragon 8 Gen 1 flagship with a 144 Hz refresh rate. In fact, not many brands are betting on a 144 Hz refresh rate, despite those in the gaming segment. Moving around to the back, the handset has a triple-camera setup. It comprises a primary 50 MP shooter, a 50 MP ultrawide snapper, and a 2 MP depth sensor unit. Selfies are also good thanks to a 60 MP snapper. Interestingly, in China, there are two variants – Punch-hole and Under-screen camera versions. However, we don’t know if the latter will make it to international markets. Especially when it carries “Special Edition” on its name.

The Motorola Edge 30 Pro also features stereo speakers and a side-mounted fingerprint scanner. The device brings Wi-Fi 6E and Bluetooth v5. It draws its powers from a 5,000 mAh battery with 68W fast charging. The device runs Android 12 straight out of the box with Motorola’s skin running on top.

The Edge 30 Pro will be revealed on February 24. According to recent leaks, it won’t be the only flagship unveiled by Motorola this year. The company also has a promising smartphone with a 200 MP camera codenamed Motorola Frontier.

Previous Tesla electric cars in India must be "Made In India"