The iPhone 13 series has been in the market for a couple of months and has been selling very well. In fact, the performance of the iPhone 13 series alone has taken Apple to the top position in the Chinese smartphone market. Despite the several Android options, users still appear to prefer the iPhone 13 series. However, with the arrival of the Samsung Galaxy S22 series, the market situation may change. Nevertheless, will the Galaxy S22 Snapdragon 8 Gen 1 SoC beat A15 Bionic SoC? Although the new Galaxy S22 lineup represents one of the top flagship products in the current Android camp, these devices still lag behind Apple’s iPhone 13 in the performance benchmarks. 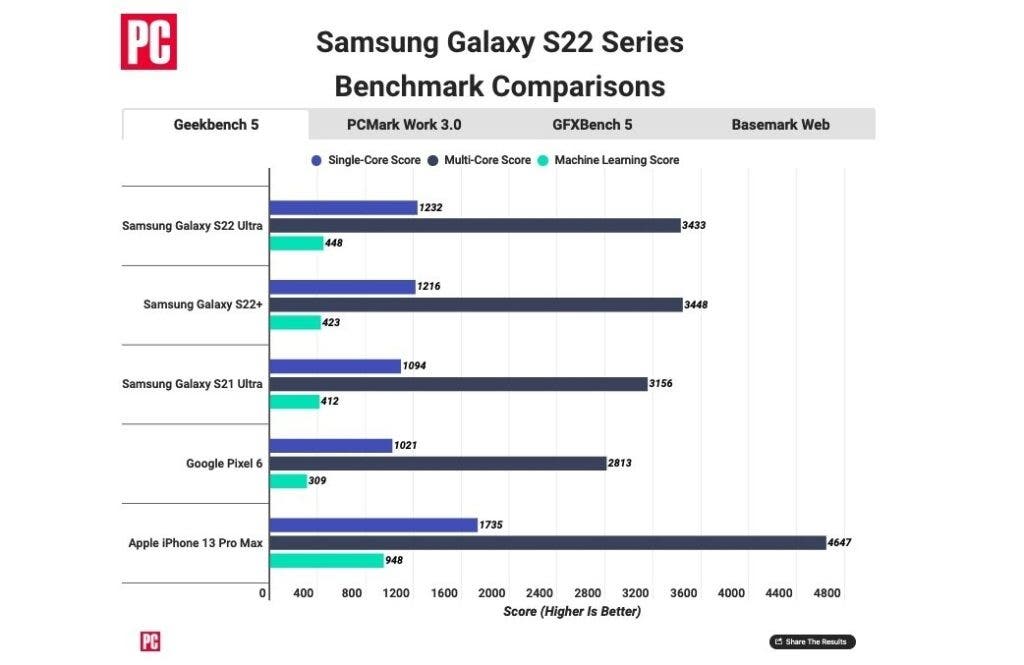 From the actual performance test, we can see that the new Snapdragon 8 Gen 1 processor powering the Galaxy S22 Ultra has a single-core running score of 1232 and a multi-core running score of 3433. However, the corresponding iPhone 13 Pro Max single-core and dual-core scores are 1735 and 4647 respectively. This shows that the Bionic A15 SoC is way ahead of the Snapdragon 8 Gen 1 in terms of performance, Specifically, the Bionic A15 SoC is 35% faster than the Snapdragin 8 Gen 1 in the multi-core test.

In the Geekbench ML (machine learning) test session, the iPhone 13 Pro Max with A15 Bionic achieved 948 points. However, the corresponding Samsung Galaxy S22 series achieved only 448 points. After all, the A15 has a 16-core neural engine, which can perform 158,000 per second.

In fact, it can be seen from the above test that the A15 Bionic still has the strongest performance at present. Furthermore, there is no hope in sight for Android as Apple’s lead is still quite large. With the new A16 Bionic chip, Apple’s device will likely remain the fastest smartphone on the market for some time.

Why you should buy the Galaxy S22 Ultra

The Galaxy S22 Ultra comes with an S Pen Stylus and this is the first time that the S series is using this feature. If this is what you miss, then the Ultra is your best bet. Of course, the iPhone 13 series can not offer you this feature. The S Pen Stylus will come handy in taking quick notes and it also supports Bluetooth controls for the camera shutter. Its S Pen experience is better than anything you have seen in the market.

While this smartphone may not be the best in terms of performance, its display is second to none. The Galaxy S22 Ultra comes with a 6.8-inch Dynamic AMOLED 2X panel with a Quad HD+ resolution. It supports a 120Hz refresh ras well as a 240Hz touch sampling rate. This means that the screen operation is completely smooth and instant to touches. The display brightness gets as high as 1,750 nits which is significantly higher than the iPhone 13 Pro Max 1,200 nits.

The Galaxy S22 Ultra comes with multiple multitasking tools such as split-screen support, app windows, Edge menus and App Pairs and so on. This makes it much easier to work on this smartphone. In terms of productivity, the iPhone 13 Pro Max is no match for the Samsung Galaxy S22 Ultra.

The Galaxy S22 comes with a feature that most brands run away from, Space Zoom. So if you love the zoom feature, the Galaxy S22 is one of very few options that can offer you this feature. The periscope telephoto camera and special software techniques gives this device a good zoom capacity. The Samsung Space Zoom allows you to achieve a wild 100x zoom.  With the iPhone 13 Pro Max, the best you can get is 15x zoom using the 3x telephoto camera

Why you should by the iPhone 13 Pro Max

One of the biggest difference between the S22 Ultra and the iPhone 13 Pro Max is the Apple ecosystem. If you are already on the iOS ecosystem ie you own other Apple devices like Mac, Apple TV or AirPods, then its best to remain with the iPhone 13 series.

The Galaxy S22 Ultra bmay have a better zoom but in videography, iPhone 13 Pro Max is clearly the leader. The later offers reliable stability, accurate color reproduction and overall clarity. It also comes with features like Cinematic mode, macro videography and ProRes support for better videos. However, it is important to note that the better the video the larger the space it consumes. So, prepare for the storage that you will need.

Of course, there is not much to say here…as we have shown above, in terms of performance, the iPhone 13 series A15 Bionic is second to none.

Next UK approves Google's plan to phase out third-party cookies