Recently, researchers at McGill University in Canada released a study on smartphone usage of nearly 35,000 people in 24 countries around the world from 2014 to 2020. Among them, Chinese users rank first in terms of mobile phone addiction. The research paper has been published in Computers in Human Behavior. Judging from the published research results, China, Saudi Arabia, and Malaysia rank the top three. Canada ranks seventh, Japan ranks 15th, the United States ranks 18th, and Germany ranks 24th. Only two countries from Africa make the list of countries whose citizens are most addicted to smartphones. Egypt is the first on the list and it ranks 9th while Nigeria is second and it ranks 20th.

According to the paper, the subjects of this study are young adults, with an average age of 28.8 years. Furthermore,  60% of the participants in the study are women. From 2014 to 2020, the problem of smartphone users worldwide is becoming more serious. However, this trend is not ending anytime soon.

One possible explanation for the different scores across countries, the researchers say, are social norms and cultural expectations. Many of these users have the need to get motivation via their smartphones. In fact, many have their businesses and livelihood linked to their smartphones.

A set of comparisons was popular on the Internet a few years ago. All the passengers in the subway in a certain country are reading books and newspapers, while most people in the subway in China are looking at their mobile phones. Later, it was clarified that the country where passengers read newspapers is only so because the mobile phone network in the subway is not available. However, in the same region, after 5G commercialization, the situation is no different from that in China. 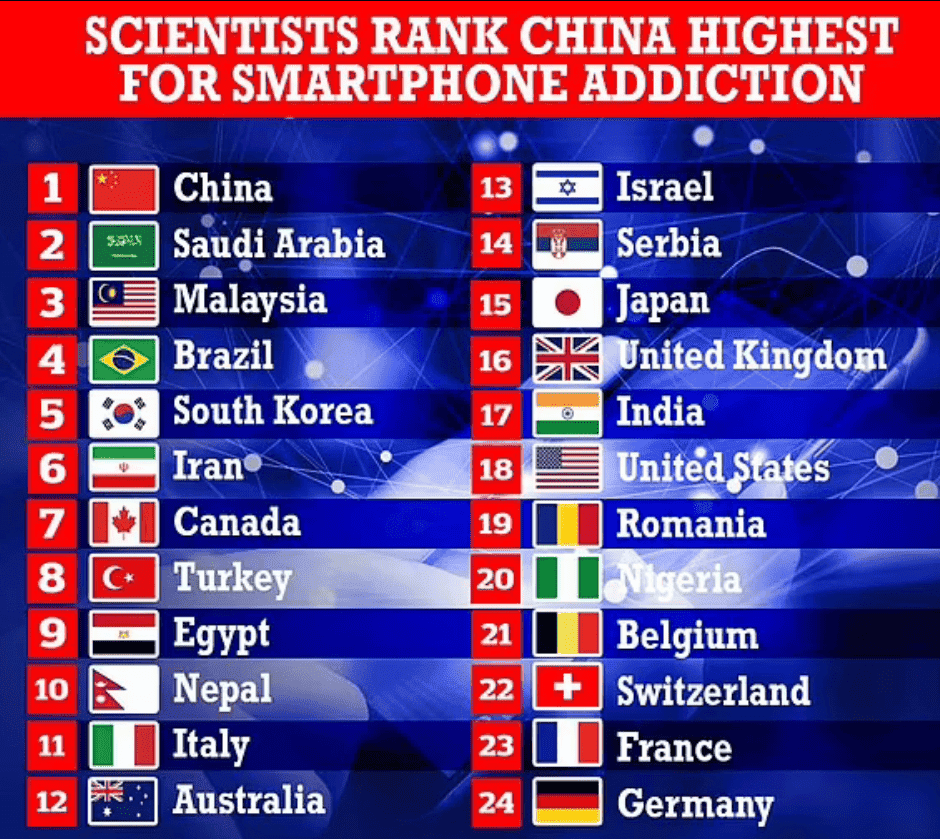 Countries whose citizens are most addicted to smartphones

The Chinese smartphone market is the largest smartphone market in the world. With over 1.5 billion smartphones sold in 2021, it is not a surprise that it is in the first position. This is because the more people in the region, the higher the probability of multiple user characters.

With the massive rate of development in the oil-rich middle-east nation, we do not expect anything less. Saudi Arabia has no less than 21 million smartphone users and the popular brands are Apple, Huawei, and Samsung.

Malaysia is another oil-rich nation with high smartphone addition. Most of the users in this region prefer Android smartphones, specifically Huawei and Samsung. However, Apple has a decent userbase in Malaysia.

Brazil is the fourth country on the list and this country has a preference for Samsung smartphones. However, users here still buy Motorola, Huawei, and Apple smartphones.

South Korea is the home to many technological advancements thus its smartphone addiction rate is not a surprise. A couple of heavyweight manufacturers like Samsung and LG are from South Korea. Furthermore, South Korea is the first country to commercialize the latest 5G network. It also has the second-highest number of 5G users globally, second to only China.

A surprise entry here is smartphone users in Iran. While we can not tell why users in Iran are addicted to smartphones, we know that there is not as much internet freedom in Iran as in other regions. Users in Iran cant have access to YouTube, Facebook, Twitter, Blogger, Telegram, Snapchat, and Medium. In addition, the government of Iran also blocks some streaming services like Netflix and Hulu. According to reports, as of 2013, about half of the top 500 websites in the world are not accessible in Iran. Furthermore, if you love health, science, sports, news, pornography, and shopping, you may face some sort of restrictions. However, this does not stop Iranian users from being addicted to smartphones. Samsung, Xiaomi, and Huawei are the most preferred smartphones in Iran

The sales of smartphones in Canada easily exceed 30 million. In Canada, the most preferred brands are Apple (obviously), Samsung, and surprisingly Huawei. Despite the regular tight schedule in the North American country, its citizens are still addicted to smartphones.

The higher taxes in Turkey makes smartphones in this transcontinental country more expensive than in Europe. A large part of Turkey is in Western Asia while a portion of this country is in Eastern Europe. This market loves smartphones from Xiaomi, Samsung, and Apple.

This is the first African country on the list of countries whose citizens are addicted to smartphones. Just like Turkey, Egyptians love smartphones from Xiaomi, Samsung, and Apple in identical proportions. Well, just like Iran, there are a number of bans in Egypt. You cant have full access to popular apps like Skype, Facebook Messenger, FaceTime, and WhatsApp without a VPN.

The small landlocked country in South Asia is best known for hosting the highest peak on earth, Mount Everest. However, Nepalese are also addicted to smartphones according to this study. Samsung and Xiaomi are the clear leaders in its smartphone market. However, Oppo, Vivo, Apple, and Huawei with similar market shares are far behind.

As of November last year, iPhones were the best-selling smartphones in the Oceanian country. Samsung and Huawei also have decent market shares in the Australian smartphone market.

The middle eastern country on the Mediterranean Sea is also addicted to smartphones. In the smartphone market here, Samsung is king. However, we also have the likes of Xiaomi and Apple having significant market shares.

Serbia is only the second European country on this list. Here, Samsung firmly holds the smartphone market while Apple, Xiaomi, and Huawei are not far behind.

Any region that has advanced technology is not a surprise member of this list. Back in the day, Japan has was a manufacturing heavyweight. Even as of now, the Asian Island is still a strong force in the technology industry. Samsung, Huawei, and Apple are the major smartphone brands in the Japanese smartphone market

The U.K. is a small but diverse smartphone market. The likes of Samsung, Apple, and Xiaomi have decent and similar market shares.

The U.S. is the third-largest smartphone market in the world. It is second to only China and India. One of the major smartphone brands in the world, Apple, is from the United States. Over 55% of American smartphone users use iPhones.

Another European country on this list is Romania. Smartphone users in this country prefer Samsung, Apple, Huawei, Xiaomi, and Motorola smartphones.

The most populous and largest black nation, Nigeria, with over 200 million people is also addicted to smartphones. However, this country is the only market that does not have Samsung or Apple as its favorite brand. Nigerians love Transsion Holdings smartphones which include brands like Tecno, Itel, and Infinix. While Tecno and Infinix have the highest market share in Nigeria, Samsung and Apple are far behind.

The other four countries on the list are all European countries including Belgium, Switzerland, France, and Germany.

From this list, it appears that Asians are more addicted to smartphones followed by Europeans. Both Asia and Europe have 8 countries each on the list. However, most of the Asian nations are high up on the list while the European countries are at the bottom of the list.

Previous Four MIUI Features You Might Not Know About