Android website and app developer Danny Lin with the nickname kdrag0n on Twitter showed off a Google Pixel 6 that ran Windows 11. According to the developer, Windows 11 is “usable,” but graphics chip hardware acceleration has no support. In confirmation that the alternative system works, he posted a screenshot showing the consumption of system resources, including the load on the CPU. If necessary, you can connect a keyboard to your smartphone and play the legendary Doom shooter. 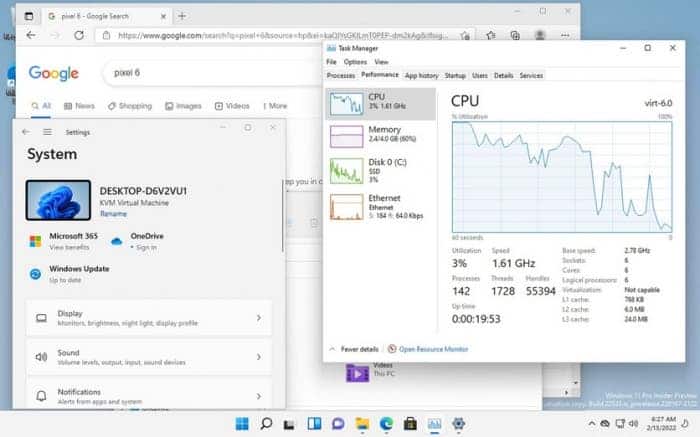 Windows 11 wasn’t the only operating system the developer used on the Pixel 6, he also managed to run various Linux distributions on the Pixel 6, including Ubuntu and Arch Linux. How this will eventually be available in the stable version of Android 13, we will find out in September.

Booting Windows, logging in, using it a bit pic.twitter.com/r1ws0WFxOg

While Android 12L is still in beta testing, Google recently released the first version of Android 13. Android 13 Developer Preview 1 is aimed at developers only, the beta version will become available to everyone at a later date, and the release is expected in the fall of 2022. The new OS is currently available for Pixel series smartphones – Pixel 6 Pro, Pixel 6, Pixel 5a 5G, Pixel 5, Pixel 4a (5G), Pixel 4a, Pixel 4 XL, and Pixel 4.

Android 12 introduces customizable Material You themes with colors that adapt to the wallpaper. In Android 13, apps can use their own icons to match the theme, not just Google’s branded apps. Such icons take on a color tint in accordance with the installed wallpaper. The feature will first appear on Pixel smartphones, but Google says it’s working with smartphone makers on a wider launch.

New security features allow you to share photos and videos with a separate app; without requiring the app to have permission to view all the photos on the device. Google plans to eventually bring this feature to all phones running Android 11 and up.

Apps will also be able to discover and connect to Wi-Fi hotspots without the need for location permissions.

Another important innovation is that language settings can now be set for each application separately. This is especially convenient for multilingual users.