After much anticipation, Xiaomi took the wraps off the first Redmi K50 smartphone this Wednesday. Interestingly, rather than bringing any of the “standard” variants, the company surprised us with the launch of the Redmi K50 Gaming. That was a surprise mostly due to the fact that the Redmi K40 Gaming Enhanced Edition was the last variant to be revealed. This time around, the brand is going the opposite way. The device also brought significant upgrades over its predecessors. For instance, it left the MediaTek chipset in favor of the Snapdragon 8 Gen 1. The cooling system is much better as well as the other aspects of the smartphone. Apparently, the device became an instant hit in China. 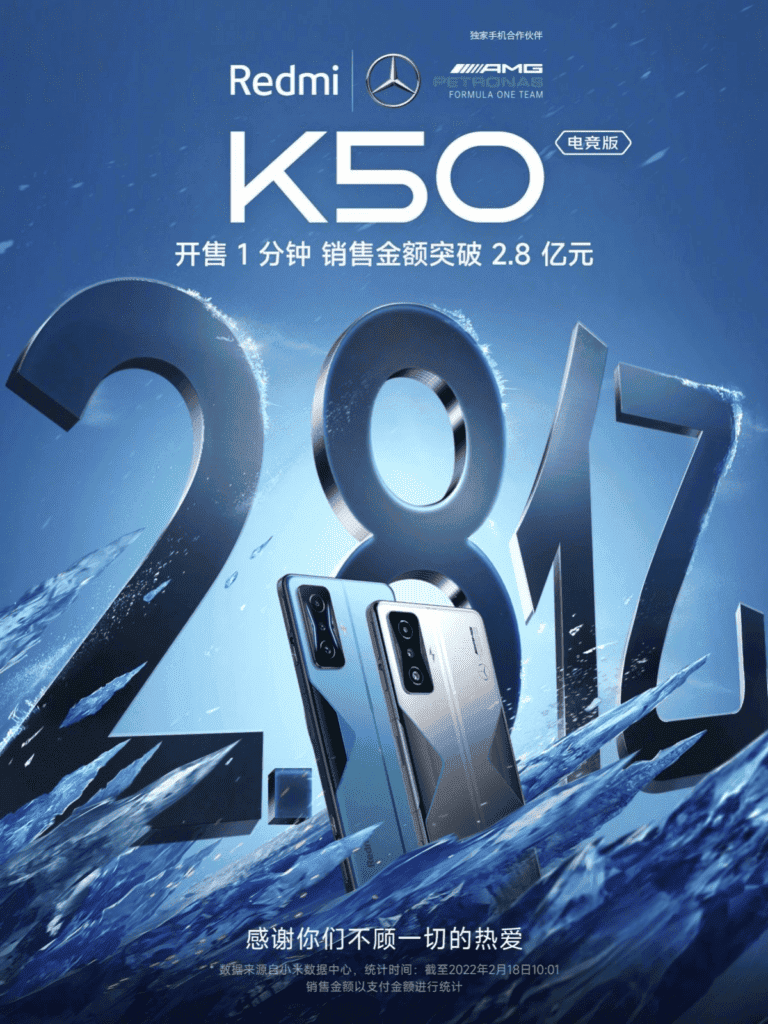 According to Xiaomi’s official Weibo handle, the Redmi K50 already brought over CNY 280 million revenue, which translates to nearly $45 million before all stock was gone. The handset sold more than 70,000 units in the first flash sale. According to GSMArena, taking the revenue into consideration, if everyone bought the higher variant with 12 GB of RAM and 256 GB of Internal Storage, which turns out to be the most expensive one, then over 70,000 Redmi K50 Gaming units have been sold. However, considering a more balanced mix, which makes much more sense here, the handset probably sold nearly 80,000 units in the first flash sale. These are expressive numbers and point out another success for Xiaomi.

To those unaware, the Redmi K50 Gaming keeps the design language of its predecessor but still makes some subtle changes. The internals, however, is the most impressive part. For instance, it brings the Qualcomm Snapdragon 8 Gen 1 SoC with 1 x Cortex-X2 core, three ARM Cortex-A710, and four ARM Cortex-510 cores, and the stellar Adreno 730 GPU. The phone also brings a huge VC chamber to ensure maximum performance and less throttling even during demanding game sessions. The specifications come around a 6.67-inch AMOLED screen with a Full HD+ resolution, 120 Hz refresh rate, and a whopping 480 Hz touch sampling rate. The phone draws its powers from a 4,700 mAh battery with Xiaomi’s cutting-edge 120 W fast charging.

The Redmi K50 Gaming has a 64 MP main camera with an f/1.7 aperture and PDAF. There is also an 8 MP snapper with an f/2.2 aperture and 120-degrees of ultrawide view. Last but not least, there’s a 2 MP macro camera. Other features include Quad Speakers, Shoulder Triggers, and a Side-mounted fingerprint scanner. The phone runs Android 12 straight out of the box with MIUI 13 running on the top.

As aforementioned, the Redmi K50 Gaming only opens the doors for a lineup that will bring more smartphones soon. The Redmi K50, K50 Pro, and K50 Pro+ will be revealed soon.