Less than two weeks are left before the announcement of the Honor Magic 4 series, and we know almost nothing about the new products. Somehow, the company manages to keep smartphones private and doesn’t allow leaks. Perhaps today is the day when we will first see what the models of the Honor Magic 4 family will look like.

The Honor Magic 4 series has appeared on sketches

A network insider with the nickname @MayankkumarYT showed sketches of four devices. Presumably, this is what Honor Magic 4, Magic 4T, Magic 4 Pro and Magic Future will look like. Honor designers did not come up with some interesting solution, the appearance of new products came from the world of Huawei and Honor flagships. The company once choose a massive main camera unit. All camera sensors rest on a round base and their number varies from model to model.

Judging by the sketches, Honor Magic Future got the fewest cameras in the main camera; but then they offered a double front camera. The presence of two sensors in the front was also preferred in the Honor Magic 4, as well as its Pro version. But the compact Honor Magic 4T is content with a single selfie camera and offered three sensors on the back. The central model of the Honor Magic 4 series will offer a quadruple rear camera, and in the Magic 4 Pro their number has been increased to five, and the total number of cameras, taking into account the front camera, will be seven. 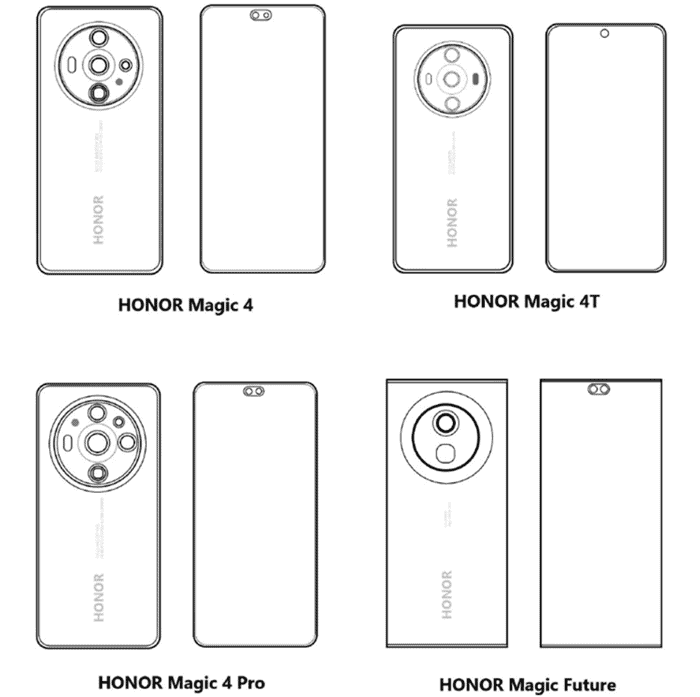 What kind of devices they will reveal, we do not know. However, observers agree that the flagship devices Honor Magic 4 will debut. The key technical characteristics of the new products have already been public on the Internet.

In addition, rumors say that the series will include three models. Honor Magic 4, 4 Pro and 4 Pro +. The first will allegedly receive a MediaTek Dimensity 9000 processor; the other two will receive a Qualcomm Snapdragon 8 Gen 1 chip. The smartphones will include LPDDR5 RAM, a UFS 3.1 flash drive, an NFC 2.0 controller, and an on-screen fingerprint scanner.

Also, the devices will have a camera with a 50-megapixel main sensor and a 50-megapixel wide-angle unit. The base version will also get a 16MP telephoto component and a 16MP selfie camera. The Pro models will include a 50MP monochrome camera; a 50MP telescopic camera, and a 13MP dual front camera with a depth sensor.