After two years, the Mobile World Congress is about to return for its 2022 conference. Many of the main smartphone brands in the industry will use the biggest mobile event of the year to reveal their new products and tease new technologies. Honor is ready to show its back to the entire world. The former Huawei sub-brand now flies with its own wings and is launching good smartphones at a much better pace than its former parent company. The fact is that Honor is free to use innovative technologies even if they have US-related licenses. In the same way, it can run Android with Google Mobile services which makes its gorgeous smartphones way more attractive for global customers. After starting the year with a foldable smartphone dubbed Honor Magic V, which got a price hike recently, the brand is preparing its new big thing in the form of the Honor Magic 4 series.

Honor’s CEO George Zhao took to Facebook to reveal a new teaser for the upcoming flagship. Once again, he teases the devices’ horsepower extracted from the Qualcomm Snapdragon 8 Gen 1 message. The teaser comes with the following message “beyond the standard” which suggests it’s beyond what we currently have in the flagship scene. These are bold words, but only time will reveal the exact details in this handset. The Honor Magic 4 also made an appearance in an early Geekbench list which compares it with the recently-released Samsung Galaxy S22 Ultra. The tipster @RODENT950 compared scores of the Honor flagship against the brand new Galaxy smartphone. The Honor handset comes out victorious with a 1,245-point single-core which is slightly beyond what the Galaxy S22 Ultra achieves (1,215). Of course, these are just numbers, and only the real-world experience will determine the differences. There are other important aspects like display, camera, battery and etc. 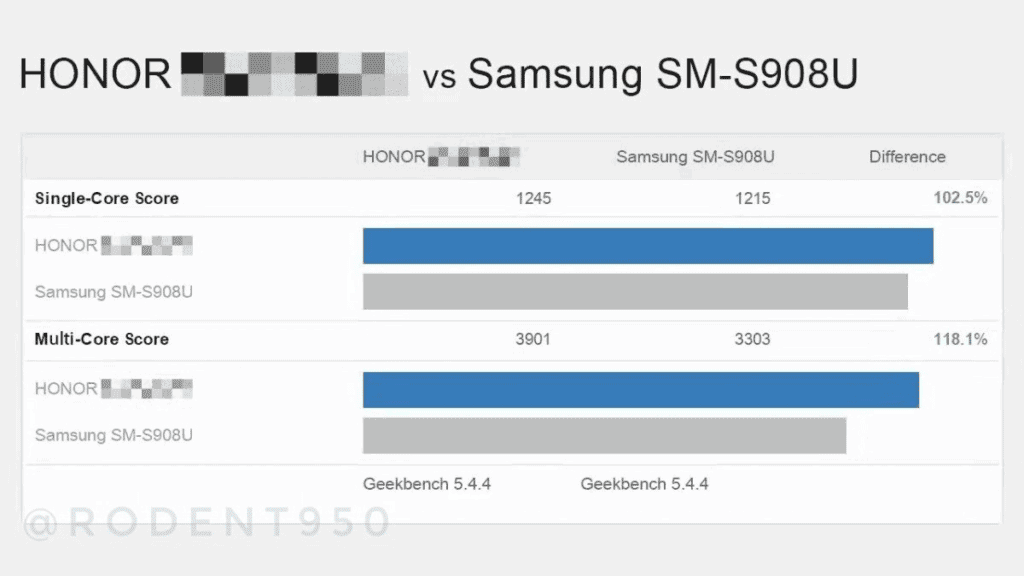 The Honor Magic 4 also won the multi-core, and this time with a much more impressive difference. The handset achieved 3,901 points over the 3,303 achieved by the S22 Ultra. Perhaps, Honor has tweaked the processor or even the software to offer this slightly superior performance.

The remaining details probably include an OLED display, an impressive camera setup. We also expect a huge battery with the company’s traditional fast-charging solution. For now, we should wait for more teasers and possibly for more leaks. It’s not possible to determine if this is the Honor Magic 4 or a Magic 4 Pro. After all, Honor will also launch a flagship phone with the Dimensity 9000. In fact, we can’t really confirm it will be named Honor Magic 4. Especially, when Chinese companies are reluctant on using this number. The device could end up being called Honor Magic 5.