The new MyOS 12 comes with some new bits spanning UI, animations, and security. The teaser post from Weibo currently only mentions “Personalized Desktop + Climber Lock Screen + Lingxi Motion Engine + Privacy Protection” as new features. However, we should be knowing more about the Android skin version with the Nubia Z40 Pro release, which is scheduled for February 25th. Furthermore, although the teaser does not mention the vanilla smartphone, we can’t see a reason for it to not bring the same update as the Nubia Z40 Pro. The second teaser posted by the company also teases MyOS 12 with a “breakthrough in the full-screen experience” whatever that means. 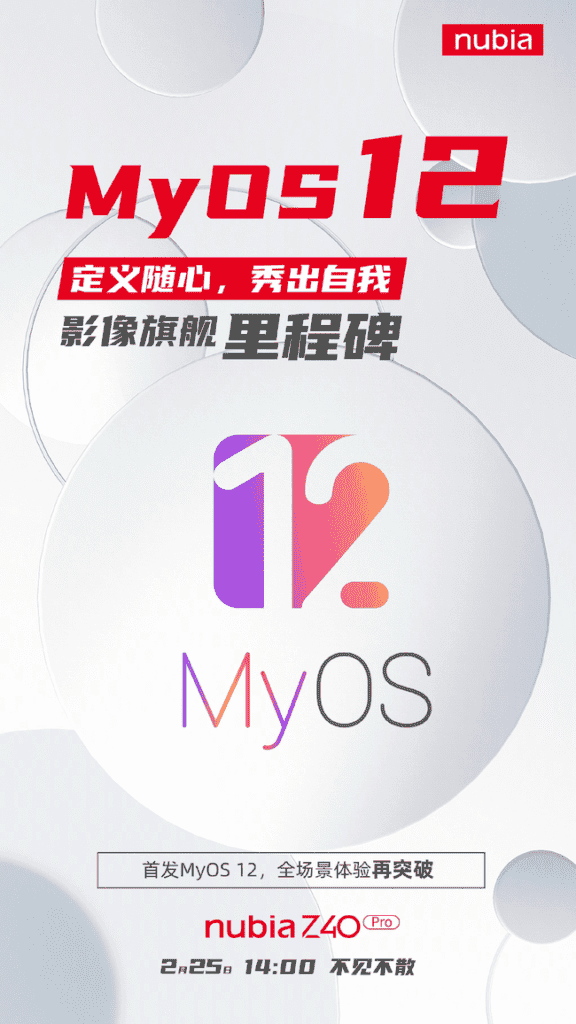 The company is teasing the handset as the “new flagship of humanistic imaging”. Moreover, we saw bold claims suggesting that this will be one of the best flagship smartphones in the market. In fact, it will carry the Qualcomm Snapdragon 8 Gen 1 SoC. As a result, we can expect a performance similar to other flagships such as the Xiaomi 12 and the Realme GT 2 Pro. However, Nubia may bring some optimizations to make the performance stand. Another detail that the company is focusing is the camera department. One of the handset’s highlights is the 35 mm humanistic lens. The company has been sharing impressive camera samples to build more hype for this handset.

When it comes to the design, the Nubia Z40 Pro features a curved screen upfront with a center-aligned punch hole. It also has a large camera module at the back. The module boasts a triple-camera setup. It will sell in two color options – Black and White. Unfortunately, the smartphone will not bring a charging adapter, so users will have to purchase a charger compatible with 135W charging separately.

We expect the company to keep sharing teasers until the release.

Next Realme 9 Pro+ will have a limited Free Fire edition