A few years ago, MediaTek lost its relevance in the flagship segment due to its poorly optimized flagships and the fact that it couldn’t really compete with Qualcomm offerings. The company retreated to rethink its strategies and returned with the excellent Dimensity series. Last year, the company decided to give a step further into the flagship segment with the Dimensity 1200 SoC. This excellent 6 nm processor was behind the competition’s 5 nm chips but was still one of the most used chips in the industry due to its appealing price for cost-effective flagship smartphones. Now in 2022, after a huge comeback, MediaTek is ready to enter the flagship market with its Dimensity 9000. After many leaks and reports, the company confirmed that its Dimensity 9000 will finally debut with the upcoming Oppo Find X5 series.

The Dimensity 9000 was announced a few months ago, but we didn’t see any smartphone with it until now. Oppo, apparently, got an exclusive deal to launch this chipset in the form of an Oppo Find X5 Pro Dimensity edition. This chipset currently is the only one in the industry made on TSMC’s 4 nm manufacturing process. After all, both Snapdragon 8 Gen 1 and Exynos 2200 are made on Samsung’s manufacturing process. 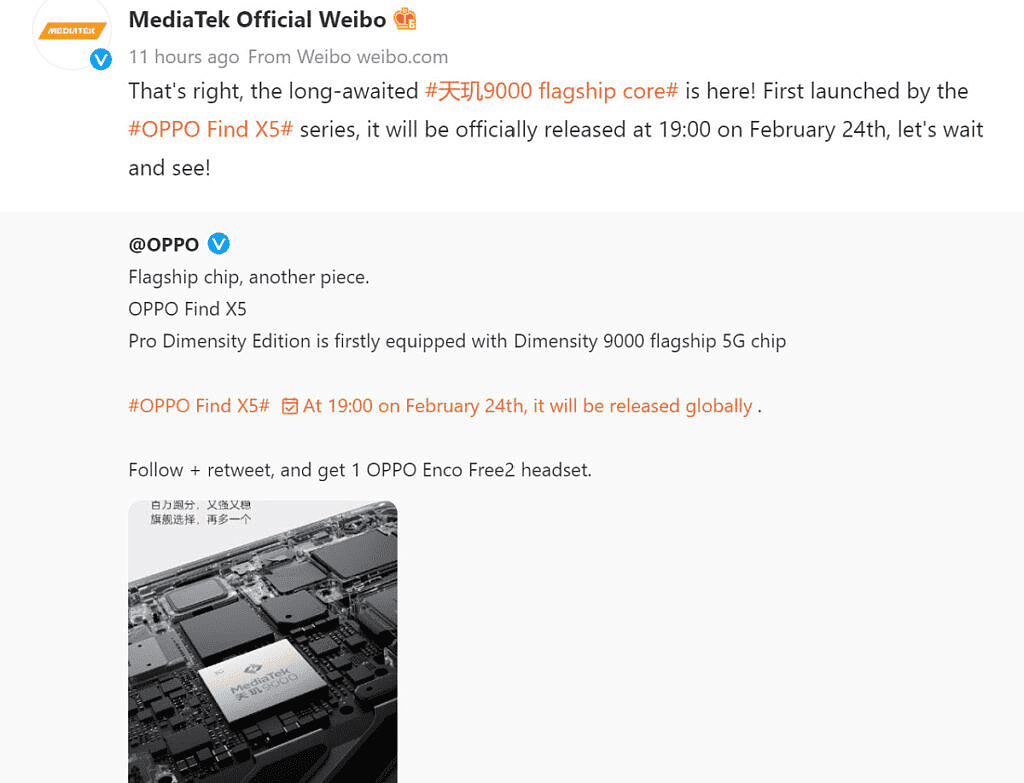 Apparently, Qualcomm isn’t satisfied and is preparing its new revised 5 nm Snapdragon 8 Gen 1+ made by TSMC. So, the Dimensity 9000 may have advantages in certain aspects. However, when it comes to the “paper”, the device has the same architecture and core configuration as its two competitors. The chipset also brings an 18-bit ISP, support for Bluetooth 5.3, and more.

Previous rumors have been suggesting the Dimensity 9000 on the Oppo Find X5. However, recent news has revealed that this chip will come in a specific version of the Oppo Find X5 Pro. We don’t know, however, how the company will sell these variants is still a mystery. The Oppo Find X5 Pro will bring powerful cameras, fast charging, and an AMOLED display with 2K Resolution.

Redmi, Vivo, and Realme will also bring smartphones with this chipset

In addition to the Oppo Find X5 series, we expect the Dimensity 9000 to also come in a multitude of flagships throughout 2022. For instance, we have Xiaomi that is preparing a variant of the Redmi K50 with its handset. Realme and Vivo have also confirmed new smartphones with this particular chipset. For now, the only question that remains is how much the smartphones with Dimensity 9000 will cost. After all, MediaTek always gained a certain advantage over Qualcomm due to the higher affordability of its chipsets.

Worth noting that the rumors suggest, that MediaTek is also working on a 5 nm processor that will carry Dimensity 8100 moniker. It will be an option for cost-effective flagship smartphones. Furthermore, the brand will bring a new 6 nm Helio G-series chip for mid-range smartphones.