Yesterday, a mysterious new VIVO phone codenamed PD2186X appeared in AnTuTu. From the leaked screenshot, we can learn that the handset sports the Dimensity 9000 chip. Its running score exceeds 1.07 million. Thus, we are dealing with the most powerful Dimensity 9000 smartphone out there. But what’s more interesting is that it comes our way from VIVO. 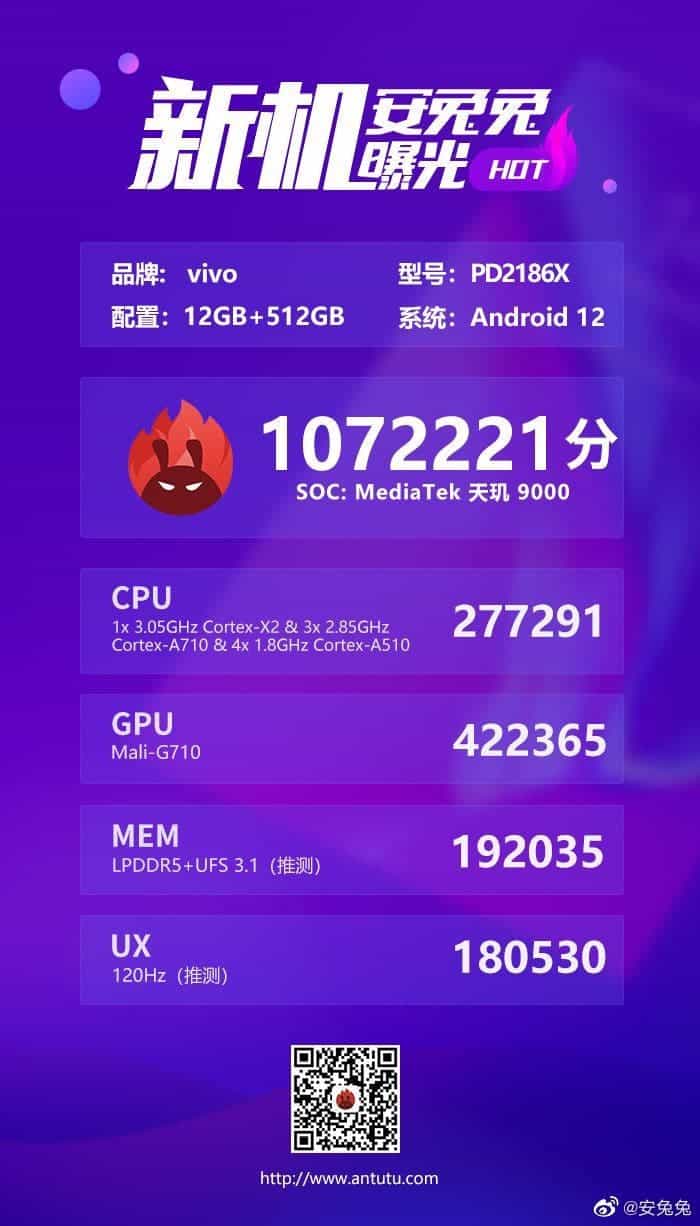 Following yesterday’s leak, today, GSMArena disclosed the benchmark scores of the VIVO phone for the Geekbench 5 benchmark platform. Looking at the benchmark points, we can see that the Dimensity 9000 outruns both the Snapdragon 8 Gen 1 and Exynos 2200 in the single-core and multi-core tests.

As for the chip, the Dimensity 9000 achieves global energy efficiency optimization. It also adopts TSMC’s 4nm process and the latest ARMv9 architecture.  The latter includes one 3.05GHz Arm Cortex-X2 super core, three 2.85GHz Arm Cortex-A710 large cores, and four Arm Cortex-A510 small cores. The SoC also supports up to 320MP camera, integrates the Mali-G710 deca-core GPU, and is equipped with R16 5G modem. When recalling the previous engineering machine powered by the Dimensity 9000, its performance is way better than that of the Snapdragon 8 in terms of heat generation and power consumption.

In addition to the excellent performance of the Dimensity 9000, the AnTuTu listing also shows that the phone uses a 120Hz display and runs the Android 12 operating system. Plus, the phone has 12GB of memory and 512GB of storage. Of course, other storage versions will be available as well. 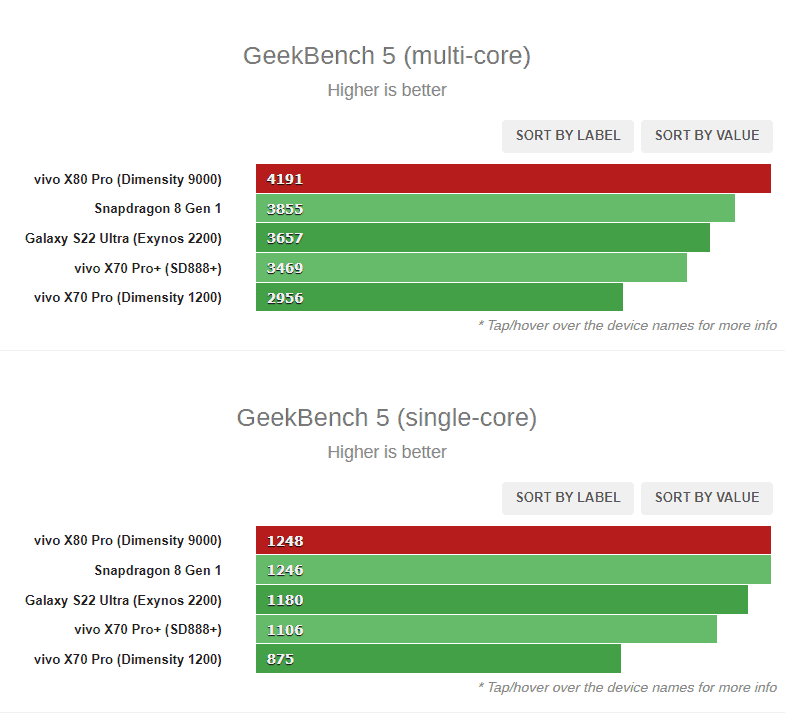 When it comes to the biggest highlights of the phone, it seems nothing will constrain the phone from becoming the king. We mean the VIVO X80 will feature a number of outstanding features. And when saying this we mean the 120-hertz display with a FullHD+ resolution. Also, on the back, the phone will carry a 50MP 1/1.3ʺ sensor that will offer support for 5-axis stabilization. There will also be a 12MP telephoto lens with 2x zoom.

Well, you might think these are not the features that will make the VIVO X80 a beast. But there will be the Pro version that will have a number of advantages over the vanilla version. Among them, we can mention the 6.78-inch QHD+ 120Hz LTPO (2.0) E5 AMOLED screen. It’s more attractive than that of the original version, right? Also, under the hood, this phone will feature a Snapdragon 8 Gen1 flagship chip paired with an LPDDR5 RAM and UFS 3.1 storage. The camera will contain a 50MP (f1/1.3 OIS) + 48MP (IMX598) + 50MPMP (JN1 2x Zoom) + 50MP (JN1 OIS 5x Zoom) sensors combination. On the opposite side, it will also carry a 50MP selfie shooter with an Autofocus. Lastly, this device will support 66W wired and 50W wireless charging solutions.

VIVO will release the VIVO X80 series in China in the second quarter.