Tesla CEO Elon Musk has confirmed that the company’s infotainment system could soon support users’ Steam library of games. Taking to Twitter, the 50-year-old business magnate confirmed that the American EV manufacturer is prepping to improve the Tesla infotainment system’s gaming capabilities. Furthermore, as part of this development, the company could roll out support for Steam.

If this prediction comes to fruition, Tesla car drivers will soon have access to Steam’s library on the go. For those who are unaware, the Tesla Model S provides a sufficiently good gaming experience. However, it is restricted to the in-dash display. Now, the word on the street is that Valve’s Steam games store will soon debut on Tesla’s electric vehicles. Moreover, it looks like Musk doesn’t want to restrict the gaming experience to individual titles. He seems bent on bringing the entire Steam experience to Tesla owners.

Responding to a tweet, Musk confirmed that Tesla is gearing up for bringing Steam games on its upcoming vehicles. The chief executive of Tesla Motors was replying to a tweet from the official Twitter handle of Cyberpunk 2077 that simply said, “Great game.” Later, Musk was asked if CD Projekt’s hit role-playing video game is coming to Tesla cars. Much to the delight of avid gamers, the entrepreneur said Tesla is prepping to offer Steam’s whole library of games function on the vehicle’s software.

We’re working through the general case of making Steam games work on a Tesla vs specific titles. Former is obviously where we should be long-term.

In his reply, Musk confirmed that the Tesla team is currently working on enabling Steam games on a Tesla. Aside from that, he said the company will be doling out specific titles, as part of its long-term plan. Notably, Tesla cars are already capable of playing Cuphead, Cyberpunk 2077, and The Witcher 3. To recall, the tycoon has previously said that entertainment will be very important with the arrival of self-driving cars. So, providing access to Steam games is an ideal way to keep most users engaged. 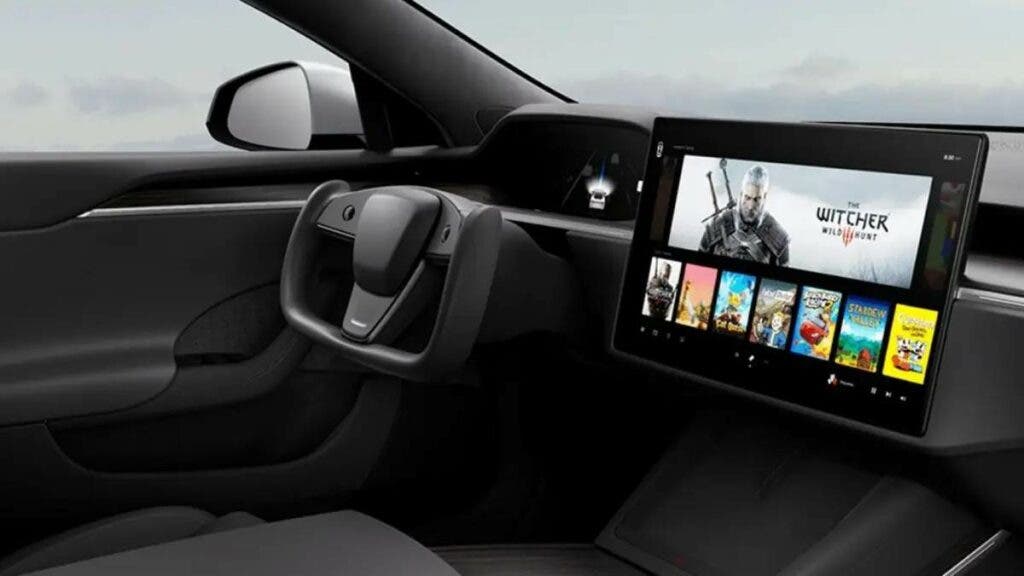 For those who are unaware, Steam’s game library boasts a whopping 50,000 titles. So, it is barely surprising that it’s part of Tesla’s long-term plan. Furthermore, the updated infotainment system in Tesla cars sports a 17-inch display. Moreover, it packs an AMD Navi 23 graphics under the hood. Tesla is still mum on key details about the AMD GPU. However, rumors making the rounds online suggest that it will come with 28 Compute Units that clock up to 2.8 GHz.