A few days ago, Yu Chengdong has officially announced that Huawei will hold a smart office spring conference at 21:30 on February 27. At the event, the company will officially release a couple of products including new notebooks, tablets, and other new products. Since the announcement, there have been speculations that the Huawei Mate 50 series could be the protagonist of the event. Earlier today, the president of Huawei Consumer BG Strategy, Li Changzhu, officially confirmed that the Mate 50 series will not launch on February 27th. 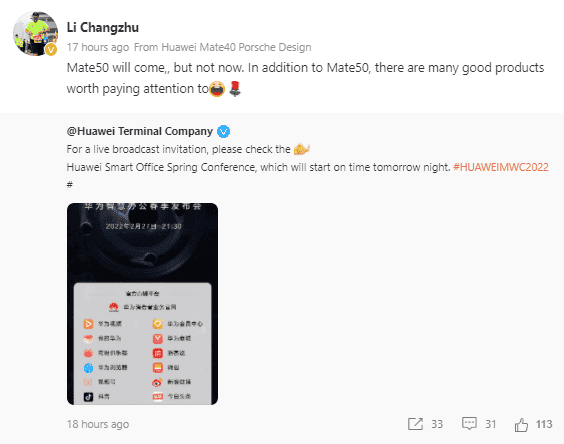 His Weibo message reads “Mate50 will come, but not now. In addition to Mate50, there are many good products worth paying attention to”

The delay in the launch of this series is because Huawei is trying to optimize the supply chain issues. According to previous reports from the supply chain, the design of the Huawei Mate 50 series is complete. However, there are significant issues with components supply. This is why there is a consistent delay in the launch date for this smartphone. However, insiders are optimistic that the company will officially debut this smartphone by July.

Over the past few weeks, there have been several renders of the Huawei Mate 50 series. These renders are based on available information and they show that the front of this smartphone still uses a hyperboloid screen with a large curvature. This is very similar to the Huawei P50 smartphone with a center punch-hole display.

In terms of configuration, some previous reports claim that the Huawei Mate 50 has two models. There will be a model with the HiSilicon Kirin 9000 SoC and another model with a Snapdragon 8 Gen 1 chip. However, none of these models will support 5G network.

Next Blackview A95 cameras: New progress in low-light photography