Samsung has pretty much ceased its work with flagships for the first half of 2022. Now, with the Galaxy S22 series officially released, the company will increase its efforts in the upcoming 2022 mid-range series. The Galaxy A-series and M-series will get a ton of new smartphones in the upcoming months. This year, we may see Samsung increasing the number of devices with 5G connectivity. The brand will likely start with the release of the Galaxy A53 5G, but the Galaxy A33 5G is also coming soon with similar specifications. While there isn’t an official word on the Galaxy A33 5G release.

While the device does not get an official release, it keeps leaking in the wild. Today, a new Geekbench listing reveals the key specifications for the upcoming handset. Apparently, the Galaxy A33 5G will offer the same performance as its bigger brother. Worth noting that all these devices have passed through the BIS certification hinting at an Indian release.

The Samsung Galaxy A33 5G will launch pretty soon in India and other key markets. As per the Geekbench listing, the phone will bag model number SM-A3360. As per the listing, the device draws its powers from a Samsung S5e8825 processor. It’s essentially the same Samsung Exynos 1200 SoC that will come on the Galaxy A53 5G. It’s interesting to see that Samsung is further expanding the presence of its Exynos chips on its smartphones. Last year, the company stuck with a strategy of using Snapdragon and MediaTek chips. This time around, however, the company seems to be bringing more devices with its own chips. 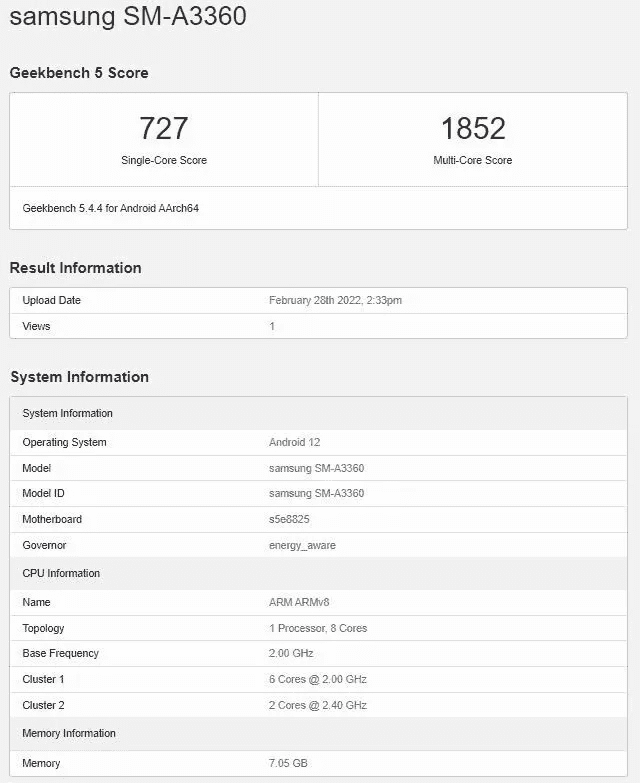 In addition to the Exynos 1200 SoC, the phone was spotted in the listing with 8 GB of RAM. This amount of RAM probably hints at a variant with 128 GB of Internal Storage. We wouldn’t discard a version with 6 GB of RAM as well. The device will probably allow users to expand the storage via a micro SD card. In addition to the processor details and RAM amount, the listing also confirms Android 12 straight out of the box. This isn’t a big surprise as Samsung is doing a good job in providing Android 12-powered smartphones, while other brands struggle to launch devices with Android 11.

The device scores 727 in the Single-Core, and 1,852 points in the Multi-Core department. According to reports, the Galaxy A33 5G will pack a 6.4-inch AMOLED display with a Full HD+ resolution. The device will pack a Quad-Camera setup on the back. It has a 48 MP main camera, an 8 MP ultrawide snapper, a 5 MP macro shooter and a 2 MP depth sensor. The handset draws its powers from a 5,000 mAh battery with 25 W fast-charging support.

The Galaxy A33 5G also had its design revealed through leaked renders.