Today, Xiaomi’s ex-brand issued a statement through its Weibo channel. According to the post, the upcoming RedmiBook Pro 2022 will sport a 12th-generation Core H45 processor. Moreover, the laptops are going to aim at gamers. And this means that it will not only have some design elements found on gaming products but also provide good performance. For this, the laptop will also boast a good cooling system.

Redmi said that its upcoming laptop will be very thin and quite lightweight. But its ultrabook-like design won’t affect the performance. The company proves that the notebook will come with comprehensively upgraded fans, heat pipes, and air paths.

Let’s get into details. For instance, the RedmiBook Pro 2022 will come with dual fans. As a reference, the previous-generation model came with a single fan. So now, Redmi can confidently say that this laptop will reach the standard of gaming notebook fans. Due to such a design, the maximum speed is increased by 300 rpm, and the total airflow is increased by 126%. This is twice of the previous generation.

Apart from the fans, the RedmiBook Pro 2022 will come with a triple-heat pipe. The previous generation came with a dual-heat-pipe system. The 8mm x 2 + 6mm heat pipe is greatly improved compared with the previous generation. The heat dissipation area has been strengthened due to the all-copper material.

Finally, the RedmiBook Pro 2022 redesigned the air duct structure and upgraded it to dual air outlets. The total length of the air outlets has been increased by 94%. Plus, the air outlet of the transfer-extraction structure has been optimized to blow down, avoiding the hot air blowing the screen.

Prior to this, the laptop has managed to appear on the Geekbench platform. From the screenshot, we can see that it features Intel’s 12th-generation Core i7-12650H processor. The latter has a basic power consumption of 45W. So we can say it’s the lightened version of the mainstream gaming processor i7-12700H. It comes with a configuration of 6 large cores + 4 small cores. In terms of core display, the i7-12650H is equipped with 64EU, while the i7-12700H comes with 96EU. 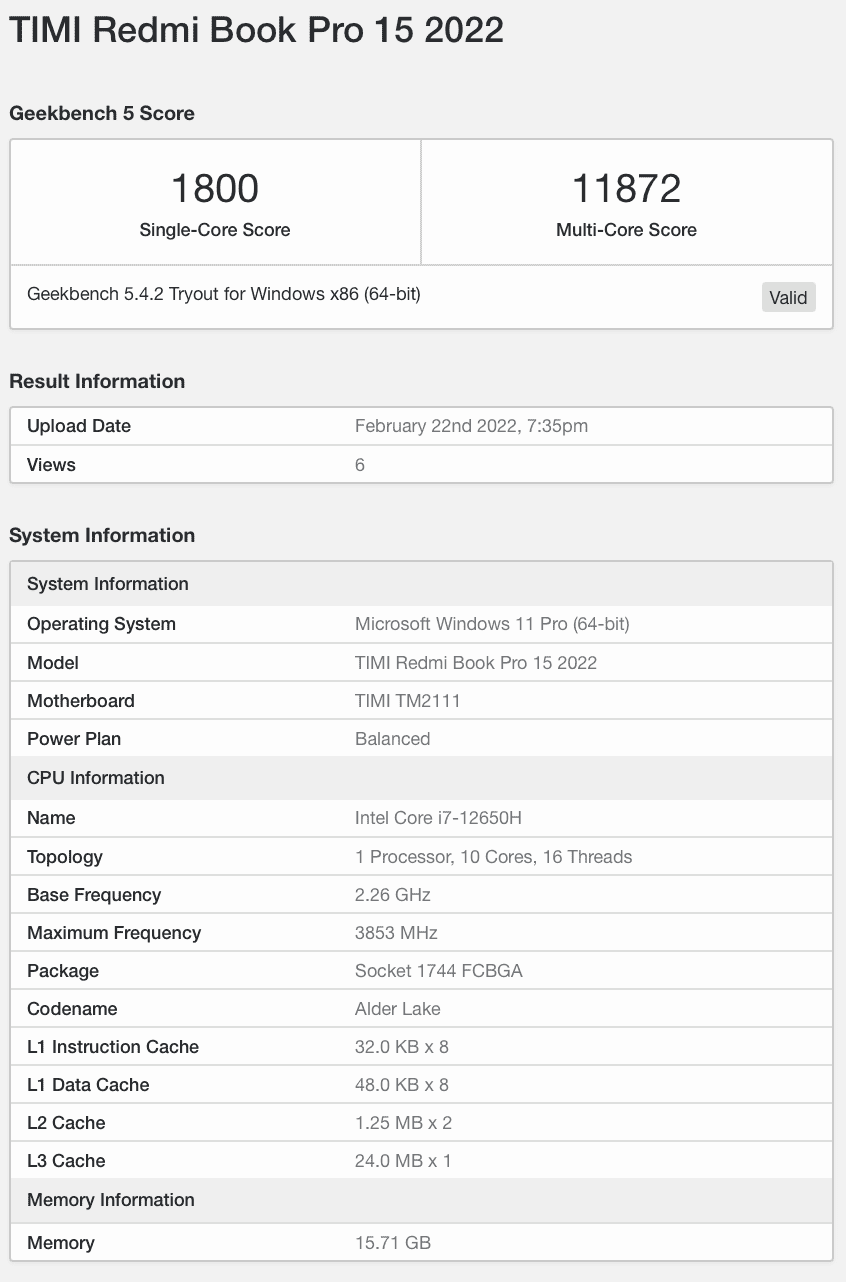