Apple released 5G iPhone products only recently. But once it did, the Cupertino-based company could capture almost a third of the 5G smartphones market.

The recent reports show that 5G smartphones account for 51% of the overall smartphone sales globally. Thus, every second smartphone sold on this planet supports the newest 5G connectivity. It is a core technology in many innovative technologies such as autonomous driving and factory automation. In this sense, China is one of those countries that is doing its best to make this technology as popular as possible. For instance, China’s telecom regulator said it would add 600,000 base stations this year to boost 5G coverage, bringing the total to well over 2 million. But you understand that China is not the only country in the world that realizes what potential this technology has.

Returning to Apple, its share of global 5G phone sales exceeded one-third. More precisely, it took 37% of the market. Samsung ranks second, Xiaomi is the third, VIVO is in the fourth position, and OPPO has managed to appear on the TOP 5 as well. 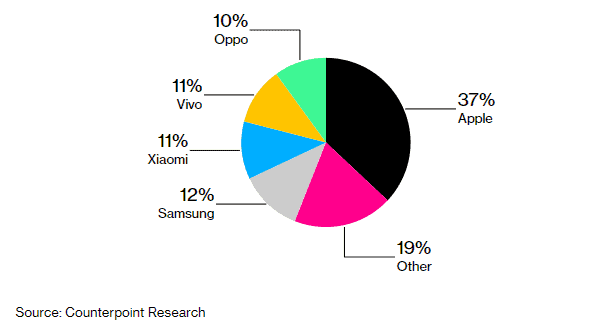 Looking at the data, we can see that three Chinese brands – Xiaomi, OPPO, and VIVO – each account for about 10% of global 5G mobile phone sales. Moreover, most of the sales were generated in China. In this sense, we should also mention that Apple’s market-leading share of 37% was also boosted by its strong position in China.

Further reading: Over 80% Of Phones Sold In China In November Are 5g Smartphones

Though Samsung Electronics was the first to launch a 5G-compatible device in 2019, its share of the global 5G market is limited to just 12% due to its laggard position in the Chinese market. But we should keep in mind that we are talking about the world’s largest smartphone maker. So due to various innovative technologies, Samsung might boost sales and approach Apple.

Earlier in March, Apple launched the iPhone SE 3 5G phone, reducing the entry price to $429. That’s about half the price of Apple’s iPhone’s average flagship device. Due to this strategy and this model, the company could secure its leading sales position.

As a reminder, back in 2019, Apple acquired Intel Corp.’s cellular-modem unit for $1 billion. It had a goal of building its own 5G chips in the future. Of course, Qualcomm is still the leader in this business to date. We can even say that there are no rivals to the Snapdragon systems-on-chips. But MediaTek is already working actively on the Dimensity series chips. And everything can change in the new future. This also refers to the leading position of Apple.

Next iQOO Z6 5G launched with Snapdragon 695 and 5000mAh battery