#AnnounceYourself: Allowing Fans to Live Out Their Dreams

From journeying through the Etihad Stadium and City Football Academy training campus, signing a new contract, selecting their squad number, to mingling with first-team players, the immersive AR experience campaign accorded football fans a ticket to live out their dreams supporting their favorite club.

Users could even take part in the TECNO Mobile 3D penalty shootout games before showing off their skills and scores on social media. The AR experience campaign culminated in a grand lucky draw where lucky contestants won rare VIP matchday tickets and travel to a Manchester City home fixture during the season.

To step foot into the virtual world of Manchester City, rather than an app or software, football fans need only to whip out their smartphones to scan a QR code with their built-in camera app from anywhere around the world.

With an AR platform that was specially designed for the campaign, features like 3D modeling, custom animation, 360-degree video, mini-games, and advanced analytics provision powered the entire AR experience for the fans.

The campaign was also evolving in real time by being interactive in nature. Users were enthralled by various continuous, exclusive digital content upgrades within the virtual world and supporters could return each time to uncover invigorating new features like special player phone backgrounds and unique video collaterals.

A Global First and a Global Success

As the world’s first immersive AR experience campaign centered around the football league, the #AnnounceYourself campaign was met with immense success.

In the months of January and February, hundreds of thousands of users all around the world wielded their mobile phones to join in on this never-before-seen experience of a lifetime. #AnnounceYourself was not only a global first, it was a global success among club fans. 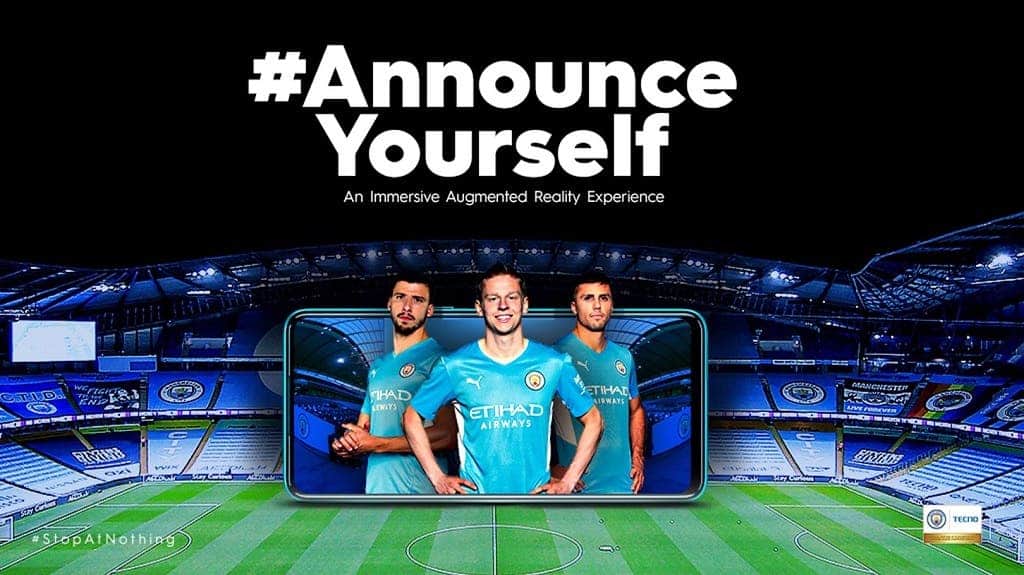 With a focus on brand communication, TECNO doesn’t just focus on sales and profits. The brand works hard to make sure that customers from all corners of the globe are deeply engaged and are enjoying themselves through campaigns such as the #AnnounceYourself campaign.

The #AnnounceYourself campaign points to how the premium smartphone brand understands and recognizes the ability of sports to unite and bond people. The success of the #AnnounceYourself AR experience campaign has also brought along advancements in TECNO’s brand awareness, reputation, and loyalty.

In so doing, TECNO has not only demonstrated the far-reaching effects of utilizing sports marketing but also worked to cement the brand’s presence on the global stage. Following previous collaboration success with Man City, this is yet another demonstration of how TECNO unleashes its creativity in sports marketing. Fully adhering to its brand spirit, “Stop At Nothing”, TECNO will continue to invest its efforts into developing sports marketing through various means so that avid fans can continue to interact with their favorite brands and sports teams in ways that were never possible.

TECNO is a premium smartphone and AIoT devices brand from TRANSSION Holdings. With “Stop At Nothing” as its brand essence, TECNO is committed to unlocking the best contemporary technologies for progressive individuals across global emerging markets, giving them elegantly designed intelligent products that inspires consumers to uncover a world of possibilities. TECNO understands the needs of consumers from different markets and provides them with localized innovations and design breakthroughs demonstrated through their mastery of serving consumers who are “young at heart” and never stops pursuing excellence. TECNO’s portfolio spans across smartphones, tablets, smart wearables and AIoT devices made for consumers in over 70 emerging markets world-wide. TECNO is also the Official Partner of Manchester City, Premier League Champions 2020-21. For more information, please visit the official website.