In recent times, one of the hottest smartphone topics is why young people don’t like to change their smartphones. According to a survey, an average smartphone user uses the phone for four years. There are many reasons behind this, and one of the key reasons is the lack of substantial innovation. Once the products and technologies lack substantial innovation and sufficient competition, they will stagnate and naturally make people uninterested. 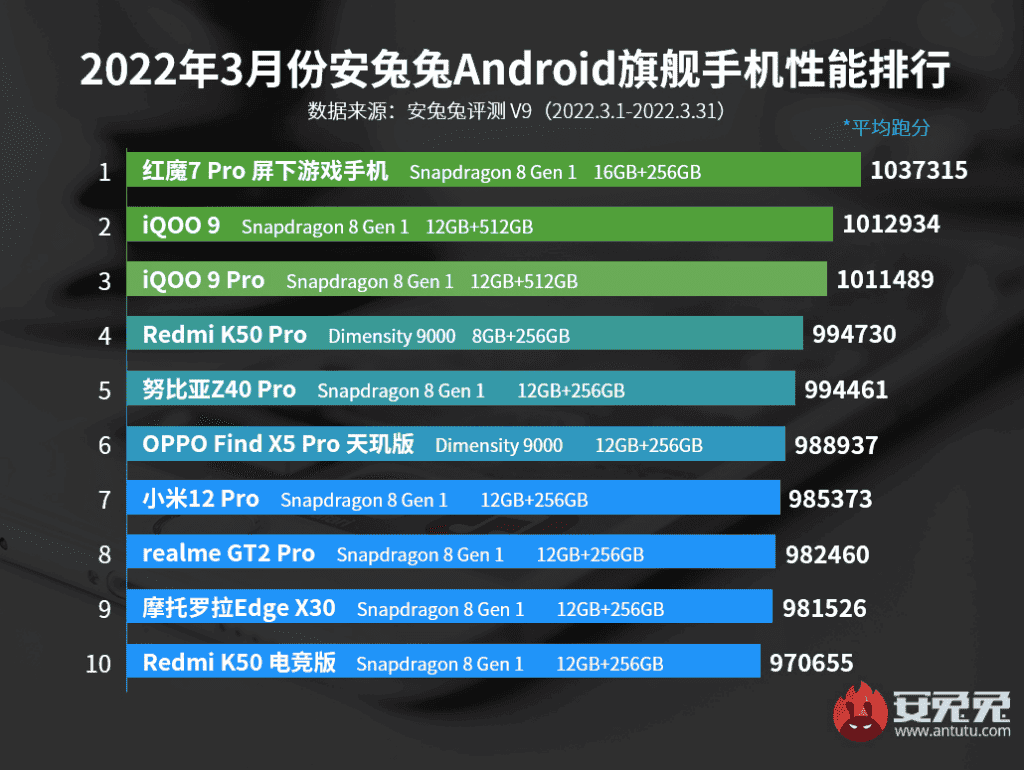 For example, Android mobile phone processors have been dominated by Qualcomm Snapdragon for many years, but fortunately, there is MediaTek. With the release of the flagship Dimensity 9000 and the light flagship Dimensity 8000 series, the market structure is undergoing new changes.

Recently, AnTuTu released the list of the most powerful smartphones (Android) for March 2022. Qualcomm’s new Snapdragon 8 Gen 1 still occupies as many as eight seats in the top 10. However, the Dimensity 9000 makes the list for the first time.

In the past two years, MediaTek first made efforts in the low-end and middle-end, quickly captured the market share, established a firm foothold, and then moved to the high-end flagship. The company now has a comprehensive layout in various price segments and has become the world’s largest smartphone chip supplier in one fell swoop.

Dimensity 9000 not only adopts the most advanced TSMC 4nm process but also has remarkable architectural technology. The CPU part is a combination of X2 super core, A710 large core, and A510 small core. This is the latest solution of ARM and the frequency is quite stable. Also, the cache and memory bandwidth are better.

The GPU part integrates the Mali-G710 MC10, which is also the latest ARM architecture, and the CPU and GPU can work together to improve performance and energy efficiency, which has basically caught up with Qualcomm’s highly accomplished Adreno. Then there is the global energy efficiency optimization technology, which covers different IP modules, and has corresponding energy efficiency optimization strategies according to different scenarios of light load, medium load, and heavy load. Finally, the Dimensity 9000 reduces the power consumption and temperature of mobile phones.

Specifically, the first place in this Android flagship performance list is the Nubia Red Magic 7 Pro gaming phone. This device comes with an average running score of 1,037,315. AnTuTu said that in terms of sub-scores, both CPU and GPU scores are ahead of the conventional models. The reason is the smartphone’s heat dissipation system.

It is understood that in order to give full play to the powerful performance of the Snapdragon 8 Gen 1, the Red Magic 7 Pro is equipped with an ICE 8.0 magic cooling system. This device has a built-in high-speed centrifugal fan with a wind speed of 20,000 rpm. With the new canyon air duct dual air intake design, the air volume is larger and the overall heat dissipation is better.

With the support of efficient heat dissipation and powerful performance, the Red Magic 7’s AnTuTu comprehensive score reached an unprecedented 1,037,315 points. This is also the highest score in the industry, and it can be called the king of Snapdragon 8 Gen 1 running points.

Furthermore, this smartphone comes with a 6.78-inch Samsung 120Hz E5 flexible straight screen. The bezels are ultra-thin (1.7mm) and the local peak brightness is up to 1500 nits. Thus, the iQOO 9 combines a good processor and a perfect display to output a great gaming experience.

The iQOO 9 Pro with 1,011,489 points is in the third position. The iQOO 9 ranks higher than the Pro version because it uses a smaller battery and the heat dissipation system handles its internals better. The Pro version comes with the same heat dissipation system as the regular model. However, the Pro model uses a 6.78-inch 2K 120Hz high refresh rate display. This screen is the Samsung E5 display that supports LTPO 2.0 technology.

In addition to the Dimensity 9000, the Redmi K50 Pro comes with some decent specifications that make it very attractive. This device also comes with a 2K AMOLED flat display that supports Super Reality Display. It uses a 6.67-inch OLED that supports Dolby Vision, HDR10+, and 1200 nits (peak). Under the hood, this device holds a massive 5,000mAh battery that supports a 120W fast charging charge.

This smartphone comes with a 6.67-inch Samsung top-level ultra-clear resolution display. It supports a 120Hz adaptive screen refresh rate. The performance of the Snapdragon 8 Gen 1 on the Nubia Z40 Pro is boosted by its top-notch heat dissipation system. In terms of battery life, the Nubia Z40 Pro uses a 5000 mAh ultra-large battery that supports 80W wired super flash charging which can deliver 100% in 32 minutes. The device also supports 15W wireless super flash charging.

Next Ulefone Power Armor 14 series case: Keep your phone always at the ready