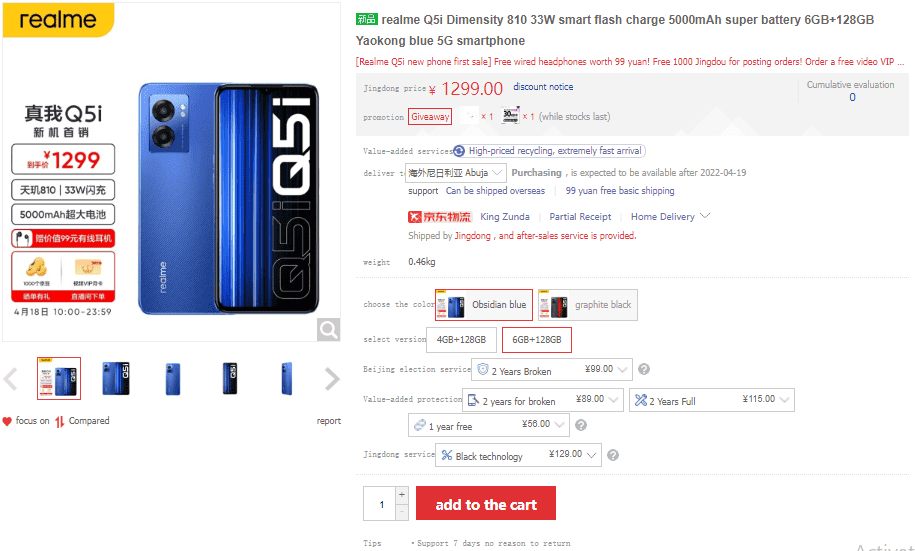 In terms of core configuration, the Realme Q5i uses Dimensity 810 processor. This is a 6nm process technology chip whose main frequency is up to 2.4GHz. This smartphone also comes with UFS2.2 flash memory. Furthermore, this mid-range smartphone uses a 6.58-inch, 90Hz refresh rate waterdrop screen.

In the camera department, it has an 8MP front camera. On the rear, it will have a dual-camera setup. Specifically, this device will use a 13MP + 2MP dual camera configuration on the rear. The rear cameras will also support super night scene mode, portrait mode, as well as AI ID photo.

The Realme Q5i is also equipped with a large 5000 mAh battery that supports 33W fast charging. The whole smartphone is 8.1mm thick and weighs 190g. In addition, the smartphone retains a 3.5 mm headphone jack, supports side fingerprint recognition, and uses dual speakers. Furthermore, it supports a maximum of 1TB memory card expansion. On the software end, this smartphone comes with the Realme UI 3.0 system n top of Android 12. There are also two colours options including Obsidian Blue and Graphite Black.

The Realme Q5i gives us a first glimpse of the cost-effectiveness of this series, which is very competitive in the thousand-yuan price range. Xu Qi, vice president of Realme, once called this series the “Thousand-yuan Machine King”. This smartphone is worth looking forward to.

In August last year, MediaTek released its new SoC, Dimensity 810, targeting the mid-range market. The Dimensity 810 uses a large core,  Cortex-A76 with a main frequency of 2.4GHz. It also has a small core, Cortex-A55, and the GPU is a Mali-G57 MC2, which supports LPDDR4X and UFS 2.2.

Realme is actually the first smartphone brand to launch a device with this chip. This chip specifically targets the mid-range market and its devices are doing pretty well. This is why Realme keeps releasing smartphones with this processor. For a mid-range smartphone, the configuration of the Realme Q5i is not weak. However, the specific performance of this smartphone will hit the public domain in a few days’ time.

Realme is one of the fastest smartphone brands in the industry. Its mid-range smartphones are also helping the company to grow rapidly.