According to the latest statistics published by Canalys, Samsung continues to hold the lead in the smartphone market in the first quarter of this year. As it turned out, economic difficulties affected the overall market for smartphone devices; there is a rollback and the pace of shipments of smartphones over this period fell by 11%.

In the first three months of 2022, Samsung’s share was 24%; versus 22% a year earlier and 19% in the last quarter of 2021. In second place was Apple, which also managed to increase the shipment of smartphones compared to the same period last year. The company’s share is estimated at 18%, while a year earlier this figure was 15%. Apple owes its success to good demand for the iPhone 13 series; and generally good sales of the iPhone SE 2022.

“Despite the looming uncertainty in global markets, the leading vendors accelerated their growth by broadening device portfolios for 2022,” said Canalys Analyst Sanyam Chaurasia. “While the iPhone 13 series continues to capture consumer demand, the new iPhone SE launched in March is becoming an important mid-range volume driver for Apple. At a similar price point to its predecessor, it offers an upgraded chipset and improved battery performance and adds the 5G connectivity that operator channels are demanding. At the same time, Samsung ramped up production of its popular A series to compete aggressively in the mid-to-low-end segment while refreshing its 2022 portfolio, including its flagship Galaxy S22 series. While Chinese vendors are still suffering supply constraints at the low end, their global expansion is being hampered by a slowdown in their home market.” 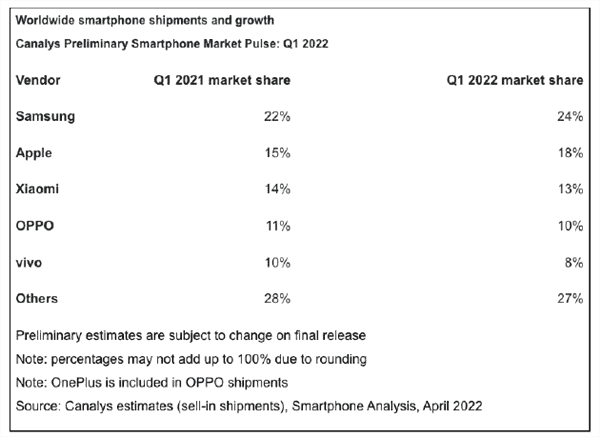 Closed the top three leaders Xiaomi, whose result was slightly worse than last year. If a year ago the company’s share was 14%; then in the first quarter of this year it fell to 13%. Oppo and Vivo’s handset shipments also dropped, placing fourth and fifth respectively in the rankings. Their share is estimated at 10% and 8%, respectively, against 11% and 10% a year earlier.

“The global smartphone market was held back by an unsettled business environment in Q1,” said Canalys VP Mobility Nicole Peng. “Markets saw a spike in COVID-19 cases due to the Omicron variant; though minimal hospitalizations and high vaccination rates helped normalize consumer activity quickly. Vendors face major uncertainty due to the Russia-Ukraine war, China’s rolling lockdowns and the threat of inflation. All this added to traditionally slow seasonal demand. Vendors must equip themselves to respond quickly to emerging opportunities and risks while staying focused on their long-term strategic plans. The good news is that the painful component shortages might improve sooner than expected; which will certainly help relieve cost pressures.”