Recently, we have been hearing too much about the upcoming Mi Band 7 more frequently. However, there has been no exact launch for this fitness product. Today, a well-known Weibo tipster said that the smartband will hit the market soon. Though there was no specific launch date, it is said to come along with a new phone.

In fact, there is nothing odd with this statement as the Xiaomi Mi Band 7 has obtained multiple certifications. Thus, there is every reason to think that the smartband will be uncovered in the near future.

At the same time, we’ve heard about its key features. Of course, we’ll learn about more specs when it is out. But at the moment, we know that the Xiaomi Mi Band 7 will come with many improvements. For instance, it will come with a larger display, support Always-ON display, etc. 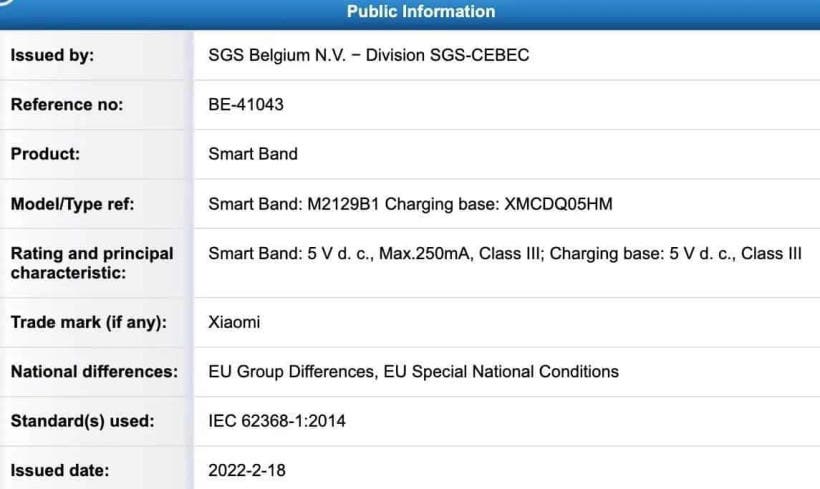 Prior to this, the Mi Band 7 appeared on Belgian SGS-CEBEC and Indonesia Telecom websites with the same model number M2129B1. The listings showed that Xiaomi Mi Band 7 will have a built-in 250mAh battery. As a reference, the Xiaomi Mi Band 6 sports a built-in 125mAh battery. Thus, the smartband ought to provide a battery life twice longer than the current model.

An earlier report from XDA suggested that the Mi Band 7 may have a larger display than its predecessor. If you remember, the current model features a 1.56-inch AMOLED display. The display of the Xiaomi Mi Band 7 will have a resolution of 192 x 490 pixels and will also support the constant display function.

However, the biggest highlight will be the built-in GPS function. In other words, users will be able to use the bracelet to record activities such as walking and running without the need for a smartphone.

The Xiaomi Mi Band 7 will also include a smart alarm clock function that automatically wakes the user to light sleep 30 minutes before the predefined alarm clock, and also supports a power-saving mode that can extend battery life.

We should also mention that the Xiaomi Mi Band 7 will work with applications for the Zepp operating system.

Well, there is no specific launch date that leaves room for assumptions. For instance, we can think that the wearable will come along with the Xiaomi Mi 12 Ultra. According to the latest leaks, the phone should hit the stores on May 10. Thus, if nothing accidental, the Mi Band 7 will appear in a couple of weeks.