A few years ago, Huawei was potentially one of the few smartphone makers that could dethrone Samsung at the top of the smartphone market. However, in light of the US Ban that started in 2019 back under Trump’s administration, the company had its dream destroyed. Since 2019, Huawei has been trying to survive in an industry where it can’t use any US-related technology or software. Huawei resisted a few years, but things started to become more problematic at the end of 2020. The US Ban was extended to the relationship between TSMC and Huawei. TSMC was the big supplier of SoCs for the Kirin chipset division. Without chips, the company took a big hit in its smartphone manufacturing. In November 2020, Huawei decided to sell Honor to a Chinese state company, to fully concentrate on Huawei-branded smartphones. The honor was then able to revive as an independent brand, free of the band and its consequences. After a very good comeback in 2021, the company has officially overcome Huawei in the domestic market.

According to research from Counterpoint, around 74.2 million smartphones were shipped in China in the first three months of 2022. It’s down 14 percent when compared to the same period last year. Worth noting that these levels are similar to the worst that the market saw during the pandemic. Worth noting that China is fighting against a new wave of lockdowns that are impacting the market. Curiously, Vivo became the top company in the Chinese market, although it lost 19.7 percent market share.

The company had to thank the Vivo S12 and S12 Pro and the affordable Y-series phones for the comeback. Meanwhile, Oppo falls to the second position with 18 percent. In the third place, we have Apple with 17.9 percent. The iPhone 13 may be different from what Android smartphones offer, but the device is the best-selling phone in China for Q1 2022. That may explain why Apple is raising the orders for iPhone 13 models. 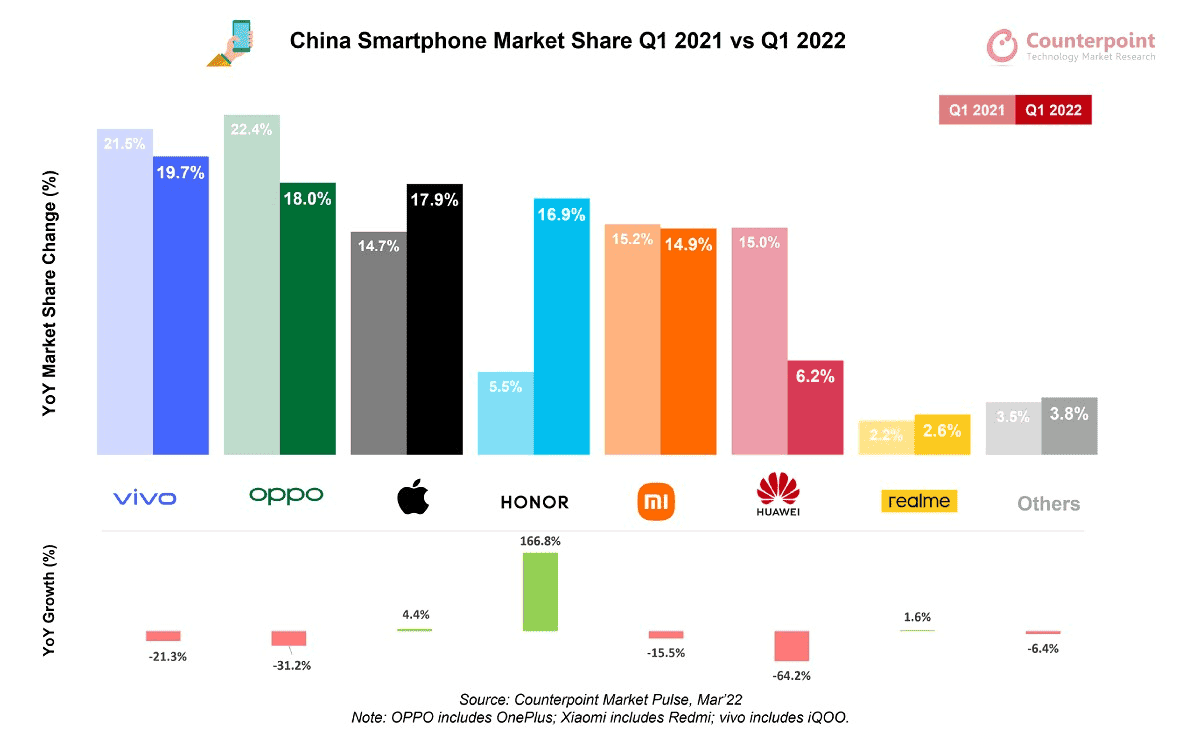 As per the research, Honor is taking Huawei’s position in the market. However, Apple was the greatest beneficiary of Huawei’s downfall. Going back to Honor, the company shot up from a lowly 5% share to a 17 percent share. The popularity of the Honor 60, 60 Pro, and Honor 60 SE helped the company grow not only year over year, but also compared to the Q4 2021. Huawei, on the other hand, falls from 15% to 6.2%.

Xiaomi is the fifth

Curiously, all these companies are ahead of Xiaomi. Xiaomi, which wanted to overcome Apple in the world, sits at the 5th position in its domestic market. Despite this, the company had recorded strong sales with the Redmi K40 series and Redmi Note 11 series. Even the Redmi 9A was a strong contender in China. The company may keep selling well now that the Redmi K50 series and the Redmi 10A are available.

The report suggests that premium foldable devices in China have just 1 percent of the share. The reason is the limited supply and the high prices. The most recent addition to the segment was the Huawei Mate XS 2.

As far as Honor and Huawei are concerned. Honor’s hike in the market, certainly shows us how Huawei could keep evolving if the ban never happened. Maybe in another reality, the Chinese Behemoth managed to become the world’s top smartphone maker.

While Huawei struggles in the smartphone segment, it once against shifting its “eyes” to the telecommunications business. It’s developing 6G networks.

Next Global PC shipments will decline by 4.3% in Q1 2022 while Mac increases