This afternoon, iQOO officially teased the iQOO Neo6 SE revealing some of the features of this device. According to the teaser, this smartphone will come with a 64-megapixel high-definition main camera. Furthermore, this main camera will support Optical Image Stabilization (OIS) as well as flagship image algorithms. 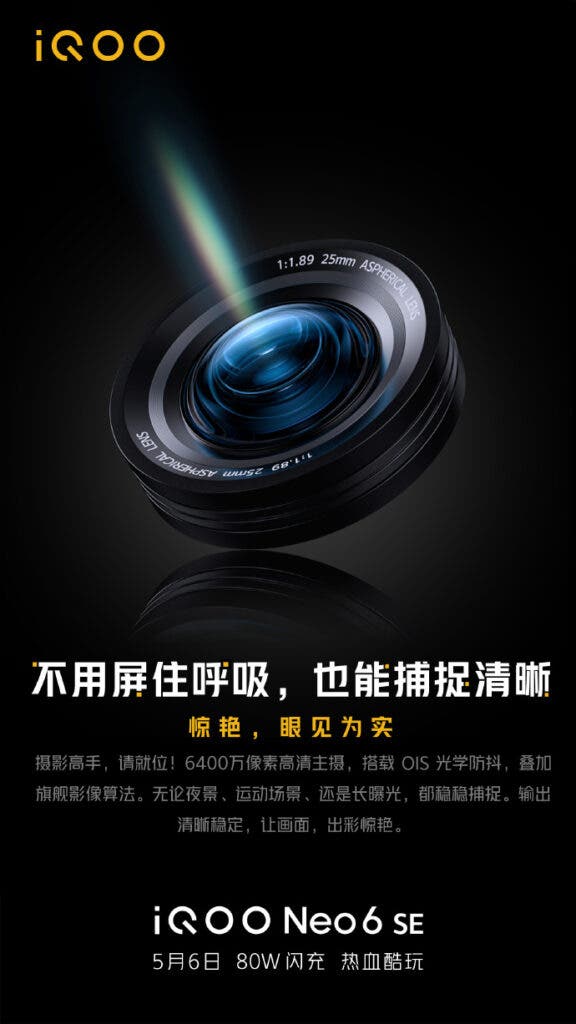 From the reports so far, the company will officially release the iQOO Neo6 SE on May 6. In terms of configuration, the new phone will come with a Snapdragon 870 processor. This device will also have an overclocked version of UFS 3.1 and UFS deep defragmentation 2.0 technology. Under the hood, this device will have a built-in 4700 mAh battery that support dual-cell 80W flash charging. According to iQOO, this device can get a full charge from 0% to 100% in 30 minutes.

Previously, a smartphone previously spotted in the IMEI databases with the model number V2157A. Now, we know that this model number belongs to the iQOO Neo6 SE. The IMEI listing does not confirm any other details of the upcoming iQOO Smartphone. However, a Weibo leakster already has some tidbits to share about the device. According to him, iQOO’s upcoming mid-range smartphone will be powered by the Qualcomm Snapdragon 870 soC. This platform was officially announced by Qualcomm last year and it is very popular for low-end flagships. For those unaware, it bags a higher clock speed of 2.5 GHz. It’s an incremental downgrade of the vanilla Snapdragon 888 flagship processor.

The tipster further reveals the upcoming smartphone will come in three colorways. Unfortunately, the colors are still a mystery or now. Interestingly, the tipster states that the device was planned to launch as the iQOO Z5 Pro. However, iQOO is instead planning on launching the devices under the Neo 6 series now. For now, we’ll need to wait for more confirmation of the specifications of this device.