On May 2, as an e-commerce and retail giant, Amazon is planning to launch 3,236 microsatellites into low-Earth orbit. The company wants to build a space-based Internet and provide network access services from space. The e-commerce and retail giant calls this project “Project Kuiper“. In April, Amazon signed multibillion-dollar contracts with three different entities. These contracts all centre on the companies helping Amazon to launch Kuiper satellites. These include Amazon founder Jeff Bezos’ Blue Origin, United Launch Alliance (a Boeing and Lockheed Martin joint venture), and Europe’s Arianespace. This is the largest rocket deal in the history of the commercial aerospace industry. 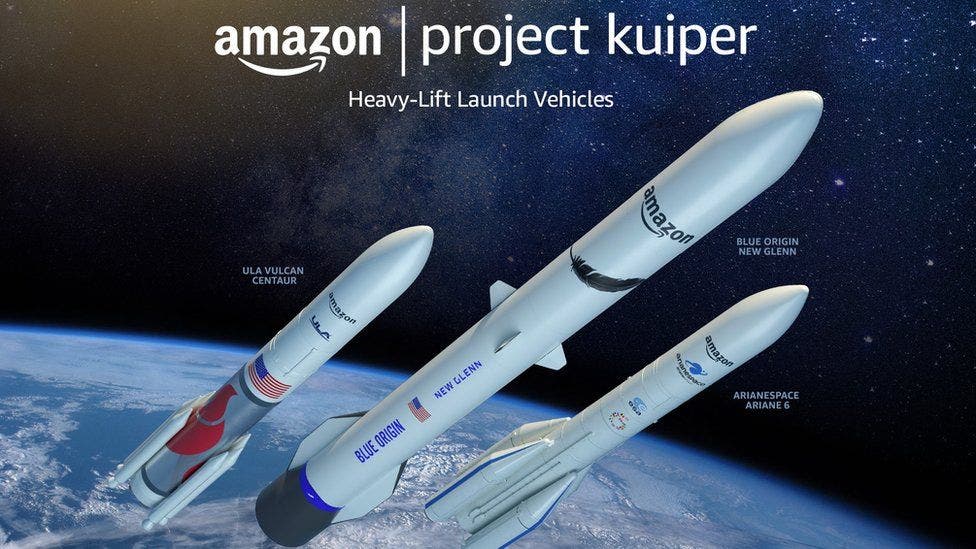 “In many ways, this is Amazon’s response and competition to Elon Musk and his SpaceX Starlink network,” said space reporter Michael Sheetz. Amazon first launched the “Project Kuiper” in 2019. However, the latest announcement from the company adds some impetus to the project.

SpaceX’s Starlink Internet already has about 2,000 satellites in low-Earth orbit, serving about 250,000 subscribers. Previously, the US Federal Communications Commission (FCC) approved SpaceX to launch a total of 12,000 satellites. By contrast, Amazon has yet to launch any satellites, but it could still be a significant player in this nascent field.

Caleb Henry, a senior analyst at Quilty Analytics, said: “The satellite communications market is worth tens of billions of dollars, and no one in the industry thinks it fits the ‘winner-takes-all’ rule. We expect at least two or even more space-based Internets to emerge. They will serve not just residential consumers, but any business or organization that relies on an Internet connection.”

An estimated 37% of the world’s population has never used the Internet. Furthermore, 96% of them live in developing countries, according to the International Telecommunication Union, part of the United Nations. Along with Facebook and Google, Amazon joins the ranks of tech giants investing in developing digital infrastructure to support their core services.

“Amazon is known as the company of everything, but it’s hard to have the company without the internet,” Henry said. “Amazon’s fastest-growing area is its AWS cloud service. To support it, the company has built a massive amount of internet infrastructure, including data hubs and fibre optic networks.”

Henry added that space is a “very natural extension of Amazon’s data business and consumer business, providing goods, electronics and resources to people around the world.”

Of course, it is going to take some time for Amazon to get close to SpaceX’s level. Nevertheless, this is a very open industry with many opportunities to explore.