Despite all the problems in the market, Qualcomm and MediaTek continue to earn more. At hand, the deficit and the number of people wishing to purchase their products is not decreasing. So, according to the results of the first quarter of this year, MediaTek’s revenue increased by 32% year on year and by 10.2% compared to the fourth quarter of last year. In monetary terms, revenue amounted to $4.8 billion.

Record on revenue was the first quarter of this year and for Qualcomm. It became a record for the company for the third quarter in a row. Annual growth was up to 61% and she managed to earn $11.6 billion.

If we talk about the alignment of forces in the market of mobile chips for Android smartphones, then MediaTek remains the leader, which controls 44% of the market share. In second place is Qualcomm, whose share is 35%, which makes good money on chips for premium devices with a price tag above $500. The Snapdragon 8 Gen 1 and Snapdragon 778G chips were in the highest demand, which is not surprising. The Snapdragon 700 and Snapdragon 8 series platforms accounted for about 68% of all SoCs shipped in the premium segment in the first quarter of 2022. 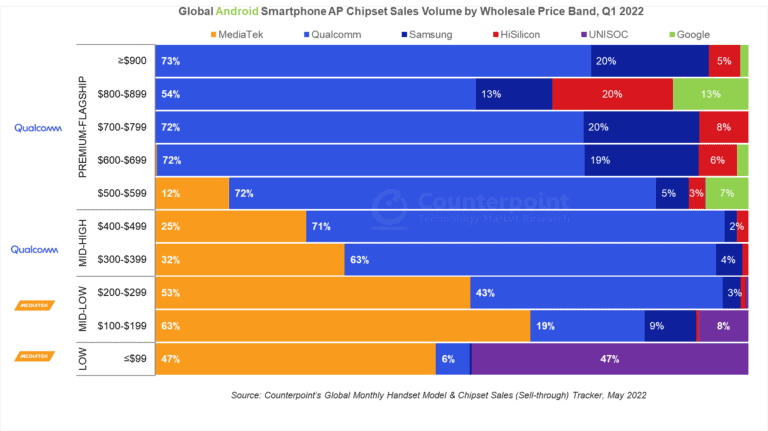 MediaTek vs Qualcomm: Rating of chipmakers for Android smartphones in the first quarter

Both Qualcomm and MediaTek posted healthy growth in Q1 2022. MediaTek recorded an impressive set of numbers for the quarter with revenues growing 32% YoY and 10.2% QoQ to reach $4.8 billion. Qualcomm saw its third consecutive quarterly record revenue in Q1 2022 at $11.6 billion. Its business units recorded annual growth of between 28% and 61%.

As for MediaTek, it is the leader in the segment of budget and mid-budget devices – from $100 to $299. Here, the sales drivers were the chips of the Dimensity 700 and Dimensity 900 series. Also, manufacturers were quite willing to purchase Helio P35, Helio G80 and Helio G35 processors. This allowed MediaTek to capture a 60% share of all chips shipped for devices ranging in price from $100 to $299.

The outsider of the first quarter of this year was Samsung; whose share in the premium SoC market fell to 23% against 34% a year earlier. The fall was also observed in the budget segment (up to $299) – 7% against 10% for the same period last year.

Previous Promotional images of the Honor 70 and 70 Pro smartphones